When I was eleven - in my last year of primary school - I had to deliver a prepared assembly talk to the rest of the village school. The only stipulation was that the talk had to be on a religious theme. In my bedroom, I started to scribble down all the reasons why, at that age, I was pretty much convinced that there was no such thing as "God". Though I didn't know it then, one of the key thrusts of my argument had been given a title by philosophers, namely - "The Problem of Evil".

The night before the assembly, I became nervous - I hadn't talked to a soul about my speech plans but something told me that atheist ramblings would not be much appreciated in a Church of England school. I dropped the idea and quickly cobbled together a little presentation about Daniel in the lions' den - bland and safe.

At a younger age, I had had this mental picture of God as an enormous being with long white hair and a long white beard with a kindly face - "Our father which art in heaven..." and he floated in a cloudy white world far above our planet, looking down, always appearing on his side in repose. 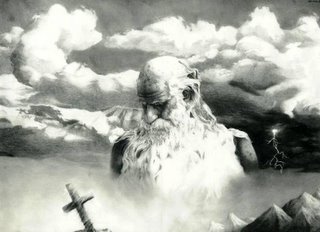 Today, as an adult, I am more convinced than ever that there is no God. Though I wouldn't wish to go into details, I have been right down at the bottom, cold and desperate and when I looked into the abyss I realised that there was no one there - no one there to help me. No God. And I think of the Twin Towers and of the recent earthquake in Pakistan and of rape and murder, Waco - Texas and The Reverend Jim Jones in Guyana, Hurricane Katrina, the war in Iraq and the London bombings and babies that die of AIDS and the crashing of aeroplanes and of man's inhumanity to man and I know for sure that there is no God.

This world we are living in is so beautiful and this is where we have a chance to make heaven. Why should we ever be so presumptuous as to expect more than this? Marx was right - religion really is "the opium of the people". It prevents clear vision and it perpetuates the myth of an afterlife. It is an obstacle to being. Religion seems to be about bigotry and self-interest. In the twentieth century, it was the underlying cause of just about every military and social conflict from Bosnia to Northern Ireland and from Kashmir to Palestine.

I live without God in the certain knowledge that the years I have left on Earth are all that I will ever have. There is no one up there, no one listening. This is it. God is a nice story and if it were true, life would unquestionably be much easier to bear. As it is, we have to look after ourselves and our fellow human beings because nobody else is going to do this for us.
- November 06, 2005