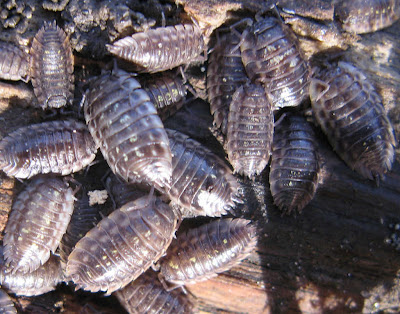 oniscus asellus
In Britain there are at least thirty five species of woodlice. Worldwide there are several thousand species with new species still being discovered. The most populous British species are the common shiny woodlouse (oniscus asellus), the common rough woodlouse, the common grey pygmy woodlouse, the common striped woodlouse and the common pill bug (armadillidium vulgare).
Fossil evidence proves that woodlice have been around and little changed for over three hundred million years whereas the best estimate for homonoid type beings is ninety million years with recognisable modern man only being around for the last 250,000 years. These figures are of course debatable but it is very clear that woodlice were here long before human beings evolved.
Our humble Sheffield house has a not so humble garden which I estimate to cover around 4,500 square feet. Much of this is grass lawn - not the best territory for woodlice who enjoy damp, dark places. Lift any brick, pot, stone, dead weed, leaf, compost bin or watering can in our garden and you will find a woodlouse party going on. Lots of them, of all ages. They are all over the place. Despite the lawned areas, I estimate that there are ten woodlice for every square foot of our garden - that's 45,000 on our property alone. It wouldn't surprise me if my guesswork was wildly conservative.
Some say that woodlice can damage young plants and several English councils' environmental departments offer advice for getting rid of them. However, in my experience as a gardener, observer of nature and former allotment keeper, I have never had a problem with them. In fact, in chomping through dead plant material and dead timber, woodlice are most probably making an invaluable contribution to overall soil quality.
They are right under our noses and fascinating to watch even though they are principally nocturnal creatures. You could say that this is their planet. They were here long before human interlopers arrived and are perfectly evolved to undertake the jobs that Nature requires of them. If there were a need to begin a "Save The Woodlouse" campaign, I would be one of the first to join it but thankfully, though some sub-species are threatened, worldwide woodlice numbers remain bountiful beyond our wildest imaginings. 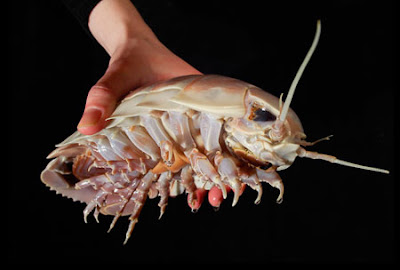