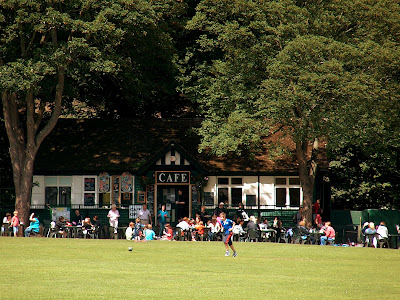 The cafe
Sheffield's industrial development owed a great deal to its five little rivers. They powered water wheels at the end of the eighteenth century and into the nineteenth. Without them there would have been no steel production, no cutlery industry and therefore no city at all.
The closest "river" to us is the Porter Brook. It flows down from the wild moors above Ringinglow descending to a flat flood plain half a mile down the hill from our house. Once this was farmland and in Sheffield Wednesday FC's very early history, it provided an occasional football field for the homeless club. However, as in many industrial cities, as municipal wealth and social conditions advanced during the Victorian era, our city fathers decided to purchase this land to create a park for public recreation. They called it Endcliffe Park after the sandstone cliffs that overlooked the area.
At first there was boating, a bandstand, a bowling green and a network of paths where Sheffielders could simply promenade. Today it remains a much loved public park and it is joyous to see it on sunny summery afternoons. There are picnics in progress, football matches, joggers jogging, frisbees being thrown, dogs being walked, children paddling in the Porter, the park cafe inundated with visitors, ducks being fed leftover bread, young lovers embracing on rugs, mountain bikers heading up the valley towards Forge Dam. It's how a city park should be.
In this park I taught our son Ian how to ride a bicycle. When Frances was a baby I would often take her to the play area in her pushchair. We have visited November 5th bonfires there, travelling fairs and circuses. Once - when Ian was ten - with a group of other schoolboys they had to enact a wartime football match for the BBC. They were telling the story of the American B17 bomber that came down in the park on the afternoon of February 22nd 1944. All ten crew members were lost following an abortive bombing mission to Denmark. A memorial stone called the "Mi Amigo" monument continues to attract wreaths and flowers to this day.
However, the most recognisable monuments were removed to the park from the city centre long ago. They were both purchased by the city to mark Queen Victoria's Jubilee in 1887. There's her now well-weathered bronze statue (1905) and a marble obelisk (1887). Both stood in the very centre of the city close to the Town Hall at the top of Fargate. Let me share some more Endcliffe Park photos with you:- 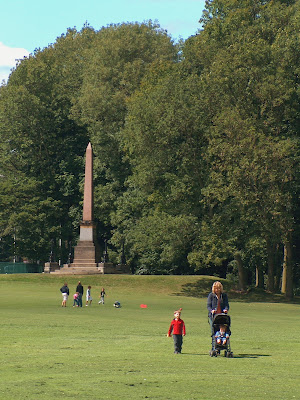 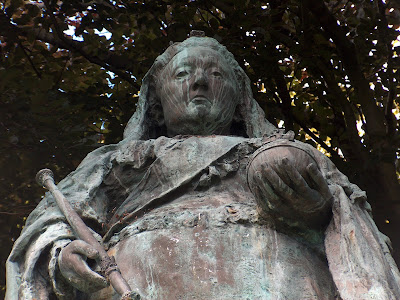 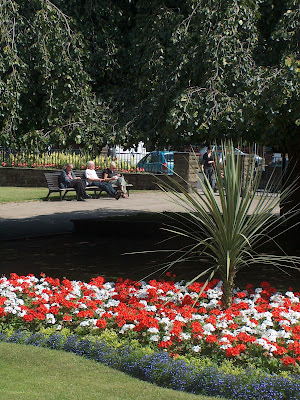 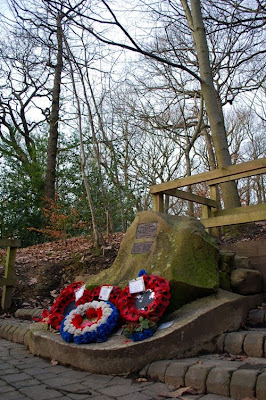