I'm not sure how I felt the night before I last flew to Thailand but tonight jungle butterflies are flapping their wings crazily in my stomach. It's like my mind and my body are reacting to the prospect of what's about to happen - flying half way round the world to another way of living in the hazy tropical heat of Bangkok. No longer will my days be my own to make of them what I will. Instead, I'll be in an air-conditioned school, obeying the commands of the classroom clock. And I'll be thousands of miles away from my nice Yorkshire life with Shirley and the paths of the Peak District, thousands of miles from Hull City's promotion campaign and my local pub where I am well-known and well-liked.

Of course it could all go pear-shaped. The Bangkok school is effectively owned by a big Thai insurance company and all employees have to undergo a rigorous medical which includes a blood sample, urine sample, weighing scales, height measurement, blood pressure and worst of all in the case of male teachers -dropping your kegs so that the doctor can squeeze the victim's testicles and examine one's old lad. Not the kind of activity I normally choose. Last summer an ex-pat teacher was sent home because he failed the medical and last time I had mine, the school secretary knew the fine details of my - presumably confidential - examination. No wonder she later kept fluttering her eyelashes at me. So anyway, I might be back home next Monday. After all that rich Christmas fayre and New Year's Eve boozing I'm definitely not at peak fitness just now.

It's another adventure. And at my age I know that I am lucky to have it presented to me on a plate. For this I thank my former apprentice - Gordon whose lovely wife has now produced a healthy little girl called Alexa. She was born just before Christmas and is the reason I'm Thailand bound in the morning. Hopefully, I will see her on Friday afternoon.

Our daughter Frances will come out to South East Asia in mid-February - partly to see me and partly to visit an old school friend in Ho Chi Minh City, Vietnam. That's something to look forward to. She never really had a "gap year" like many of her well-travelled friends - even though she spent a year at university in Birmingham, Alabama. It will be a much different world for her to taste.

So that's it. My mammoth suitcase is filled with essentials and the next time I make a blogpost it will come to you from Bangkok. The plane leaves from Manchester tomorrow afternoon - Dubai first and then onwards over India to Thailand. If the experience is half as good as it was last time I'll be very happy. Adios! 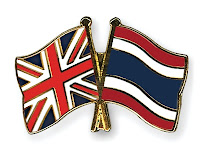