So many traveller's tales I could relate as I sit here in this little internet cafe in the north eastern port city of "Trinco" but let's go back four days to the nameless spit and sawdust pub I visited in the inland town of Dambulla. I doubt that any western tourists have ever been in this dark and dingy establishment before. I had just returned by public bus from the iconic volcanic plug mountain known as Sigiriya - a fortress and a temple with a history that reaches way back before Jesus or Mohammed.
I had sweated buckets and was desperate for a bottle of "Lion" lager. So I go in to the "pub" and manage to buy my drink, noticing that the cave-like bar is populated by rough men with whiskeys, very strong beers and cigarettes. What the hell! It's five in the afternoon. Anyway, I am sitting at a formica table when Cyclops arrives. He just stands there glowering down at me. Beer gut. Open shirt. Very much inside my "personal space". It's rather uncomfortable but then in very broken English and sign language and interpretation by another guy, Cyclops manages to show me his various scars and injuries including his missing right eye. He keeps pulling down the lower lid to show me the damage. Nice one Cyclops! He is the best fighter in town and the two bartenders are clearly very wary of him. 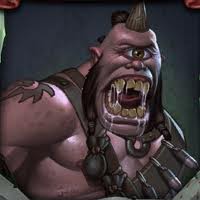 He is as drunk as a Tory MP at a fund raising shindig and he offers to fight me just for fun but of course I decline and buy him a beer instead. Then he insists through the interpreter that I give him two hundred rupees (one pound) to assist him in his purported plan to get a glass eye to hide his gaping butcher's shop socket. Then I am his best friend. His thumb is up and he shakes my hand and hugs me before I leave. The beer was cheaper than anywhere else but the ambience couldn't have been more different than The Royal Hotel in Kandy.

Ah well, a day in Trincomalee then back to the lovely white beach at Nilaveli. I was up at 5.30 this morning to see the sun rise deliciously over the Indian Ocean. Tomorrow, onwards to Anuradhapura. This has all been such a wonderful adventure. I am so glad I picked Sri Lanka and am keeping my fingers crossed that nothing will go wrong before I fly back to Bangkok next Tuesday. You never know.
- April 12, 2013