Yesterday was a lovely blue sky day. It felt more like April than January.

Clint carried me south for an hour - past Chatsworth House and onward to Darley Dale, Matlock and Wirksworth. Finally, I found a place to leave him - by a quiet lane near the hamlet of Ashleyhay in a rural area of Derbyshire  that is commonly referred to as The Amber Valley.

I might not be an expert in many things but I am pretty good at map reading. Britain's premier mapping organisation - The Ordnance Survey - produce a wide range of maps. The most detailed ones even show  field boundaries with great accuracy and they are an excellent guide.

However, yesterday I had a smaller scale map that I had printed off on an A4 sheet. It showed public footpaths but no field boundaries or other fine details. Another important factor here is that most of the paths in The Amber Valley are not well-trodden. Wooden stiles and waymarkers are generally poorly maintained. In that sense, it is quite different from The Peak District. 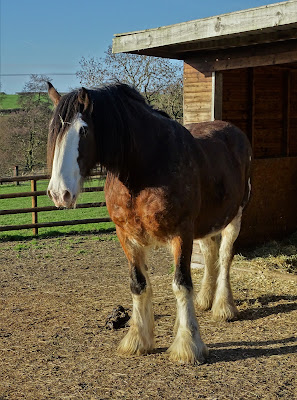 That's the background to how I managed to get lost - not once but three times. Getting lost meant that I left the area covered by my A4 sheet. It also meant that I ended up walking three or four miles more than I had planned and it also created the following scene.

Disoriented and trying to get back on track, I descended  wide green pastureland. In the small valley at the bottom there was a lazy stream that meandered through woodland. Wary of the marshy ground within those woods I walked fifty yards further up the little valley and then plunged into the woods. Three minutes later, I was pleased to have crossed the stream without getting my boots wet.

Next I had to negotiate a bank of dead brambly briars that would have been impassable in the summer. I reached my legs up like an inelegant ballet dancer in order to tread down the barbed and entangled shoots. Progress was slow and then suddenly my right foot was no longer on solid ground. It sank right up to the thigh. I had trodden in the entrance to an old badgers' sett. At first my foot was stuck but with a little manoeuvring I managed to yank it out.

Through the brambles like Indiana Jones and then over a a barbed wire fence that was itself entangled and half-hidden by climbing plants. I am happy to report that I avoided personal injury to the nether regions. 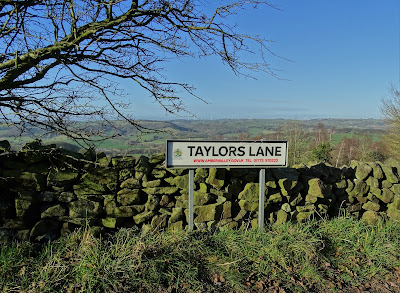 Half an hour later I found myself in the village of Cowers Lane. It was off the map and far from where I wanted to be. In "The Railway Inn" the blonde barmaid's geographical skills were on a par with my own knowledge about knitting but helpfully she agreed that we were somewhere in Derbyshire.

I sank my pint of orange cordial and soda water and soon set off towards Idridgehay. It was late in the afternoon and already I observed that daylight was being sucked away by the low sun. If I was going to avoid getting back to Clint in darkness I needed to press on - marching like a soldier across that unfamiliar terrain, missing the leisurely and more scenic route I had visualised on Monday night.

Another rarely trodden path led me through the farmyard of Alton Mill Farm where a herd of Friesians were waiting to be milked. The farmer showed me the way. It led through a gateway and a veritable quagmire of slurry. But as the French national anthem suggests,sometimes you just have to March On! March On!
- January 09, 2019