When Lord Pudding of The Nether Regions descended the stairs of his stately mansion yesterday morning, this was the sight that befell his gaze:- 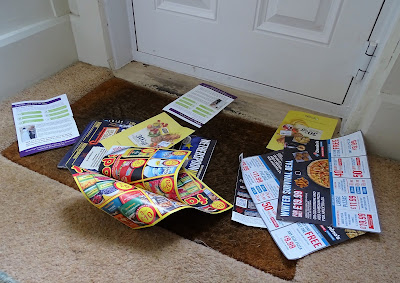 For a moment, Lord Pudding wondered if some lout, yob or ragamuffin had malevolently pushed a fistful of litter through his chromium letterbox.

As his lordship's faithful housekeeper was not on duty, he gathered up the offending material in order to inspect it. In the process, a lightning bolt of pain described a circle in his right knee. "Cripes!" he muttered under his breath.

Lord Pudding laid the material on the first treads of his grand staircase. Quite rapidly he was able to discern that each item of the rudely delivered advertising material had an identical twin. In other words, there was two of everything!

Two pamphlets from a cheap supermarket called "Farm Foods"! How terribly insulting to suggest that someone of Lord Pudding's status  might ever shop in such an establishment!

Two enormous leaflets from "Domino's Pizza". The lord was bemused. It is widely known that he despises pizza - once describing this particular fast food as "discs of cheap pastry with some random stuff smeared on top". He wondered to himself, "Who is this Domino fellow anyway? I shall give that bounder a ruddy good thrashing!"

Other duplicated items included a  leaflet from the online supermarket - "Ocado" which his grace has never graced with his custom, a leaflet promoting private "Care" visits in the home, a "Check-A-Trade" brochure promoting "trusted" tradesmen and a forty eight page magazine called "Wetherspoon News".

That last item puzzled Lord Pudding greatly. "Wetherspoons" is a big chain of pub-restaurants and yet the magazine appeared to be pushing a pro-Brexit political message. Then Lord Pudding remembered that he had seen the founder of "Wetherspoons" - Tim Martin on a late night political show banging the gong for Brexit. "He should stick to beer and burgers!" grumbled his lordship.

Lord Pudding gathered the various items up and limped outside to his blue recycling bin. All that paper! All that printing and energy for nothing! This damnable junk mail - it seemed rather like a physical version of the scam phone calls he was perpetually fielding. Lord Pudding of The Nether Regions wondered who he could charge for gathering up the various unwanted items, for tweaking his knee and for having to take the bloody stuff out to his recycling bin on a cold January morning.

"It's execrable!" he fumed over his porridge. "Odious! Despicable! And just plain wrong!"

Dimly, he remembered a line from an anti-war song recorded by  Peter, Paul and Mary back in 1962.. "When will they ever learn?" 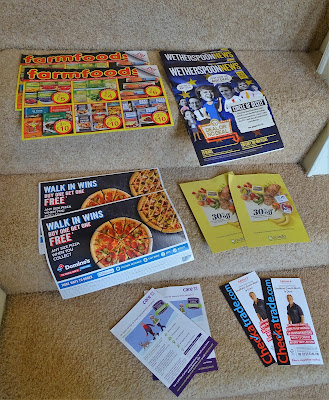