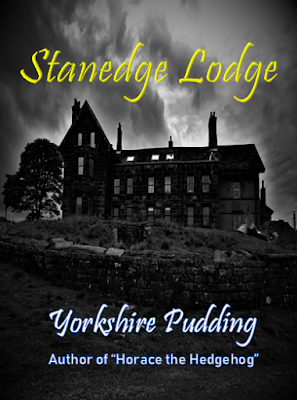 High on the moors, there's an abandoned stone cottage. It sits beside remote Oaking Clough Reservoir, miles from anywhere. Alone but for a few ragged moorland sheep and the plaintive calls of lapwings, this tiny building was erected during the Victorian era for waterboard workers.

That is where I sheltered when the rain began to pour. It lashed down in torrents so I stayed put and dry inside. Outside, November's afternoon light was quickly fading. When would that rainstorm end?  Hearing it battering the stone slabbed roof, I hunkered down in the snuggest corner I could find and rested my head against a wall.

Perhaps I was only asleep for a few minutes but when I woke the ceaseless rain had ceased and night had fallen. Only the very last vestiges of daylight remained in the western sky as a half moon now soared above me like a Chinese lantern, moving in slow motion - following the departed day.

Stumbling, I followed a now replenished stream wrung from that exposed moorland. The peaty landscape acts like a vast natural sponge - east of  Stanage Edge. It was impossible to clearly see the way ahead and the rough vegetation was of course now sodden. That half moon lantern provided weak illumination helping to define the shape of the skyline.

Had I come the right way? Maybe I should have turned back. The waterboard ruin wasn't far behind. My boots squelched in  black porridge. I felt almost blind. More than once I fell down, my tumbles cushioned by heather clumps or crowns of  bog grass. Somewhere close by a red grouse cackled. And then I made out what I thought was a wall, running arrow straight into the night.

It was a tumbledown wall, long neglected, no doubt hewn from the exposed millstone of nearby Stanage Edge. I remembered it from before and I knew that if I followed it it would take me to an old track along which I could descend to Redmires and then home.

Progress was slow but the broken wall kept me out of the adjacent quagmire. My waterproof walking trousers were already soaked. I staggered along, sometimes feeling my way though my eyes were now better adjusted to that pale moonshine. High above, the navigational lights of an aeroplane blinked at the stars. I imagined those air travellers, strapped in their high-backed seats, reading inflight magazines as I floundered along, alone in the dark.

And then I reached the unmade track. To the left, rhododenron bushes bent over black hollows. To the right, the silhouette of an old stone hunting lodge reared up defiantly. I had often seen it from afar on my rambles. It stood in the middle of a big swathe of the moor with impenetrable plantations on either side of the access track.

Though it was time to get home, instead and illogically I turned right heading up the track to the lodge as though magnetised. What was I thinking of? Why oh why did I not turn left?

Within five minutes, I was standing in front of the lodge. Its windows looked eastward over the moor and the shadowy spruce plantations and the three reservoirs at Redmires and the sprawling suburbs of the city. In its splendid isolation, it seemed daunting and defiant, like a medieval castle, designed for defence and not for guffawing grouse shooters in tweeds.

As I stood there in the November night, a cold polar breeze billowed silently, ruffling my hair like an invisible hand. Behind the window glass there was only pitch darkness, no sign of life and then I inhaled a deep breath. There was light in one of the upstairs rooms! Perhaps candlelight or a lantern. It glowed brighter. I saw a shape, a figure. Was it a man or a woman? There were muffled sounds of people shouting and then the light was extinguished.