Did you ever find something... something that sticks in your memory?

Long ago in 1970, as the Isle of Wight Music Festival was ending, I found a Pentax Spotmatic camera hanging from a beam above a primitive row of toilets - precarious planks with bum holes suspended above a stinking trench. I snapped the abandoned festival site, including sleepy festival goers in polythene sheets as a thin rain descended. It had been quite amazing - Jimi Hendrix, Leonard Cohen, Joni Mitchell, Donovan and Free... Later I sold the camera for twenty five pounds in a camera shop in Hull.
Around 1991, I was returning from Scotland after attending a university friend's fortieth birthday celebrations. I pulled in to the motorway services on the M6 just east of the Lake District. It was around nine at night and there on the big entrance mat by the double doors I spotted a bundle of banknotes. I scooped them up and headed for the cafeteria area. £65! It was more than enough to pay for my weekend away. If you are the one who dropped it, I thank you ever so much. 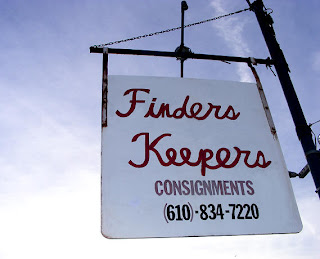 It must have been a couple of years earlier, Shirley was working at the hospital and I was looking after the kids. I recall that Frances was in her aluminium framed baby hod, surveying Derbyshire from her vantage point on my shoulders. Holding Ian's little pink hand, we marched across a ragged sheep pasture and there in a hollow we spotted an ancient sheep's skull. It had been abandoned so long that the bone was bleached white and all signals of flesh had disappeared with the passing of several seasons. We still have that skull, a souvenir of a time long gone.

I found many other things: a rare Pacific seashell, stamps commemorating the discovery of Rotuma, an old grindstone and a stoneware Barnsley Vinegar Company bottle, the diary of a woman student at university detailing her life - including several sexual encounters, wartime grocery products in a derelict house in Devon and a strange wooden object the size of a mango that came rolling down the hill as I walked up to Edinburgh castle with a former girlfriend. Carved upon it was the primitive image of a man holding hands with a woman.
What did you find?
- November 26, 2008