There are lots of pubs in England called "The Red Lion", "The Royal Oak", "The White Lion" and "The Prince of Wales" but there are only two called "The Banner Cross" and one of them is a short stroll from our house. It is my local and I have visited it regularly for twenty years.
The pub has a mock Tudor frontage. No car park because it faces busy Ecclesall Road - the main southerly route out of Sheffield. It has three rooms. Upstairs there's the games room which attracts a younger crowd and downstairs there's the old "tap room" and the lounge. Presiding over this drinking empire are the redoubtable Janet and Roger. Rough as they come, Roger is regularly stricken with painful attacks of gout these days while Janet sees red mists when ever anyone crosses her and she can swear like a trooper. I think she might be described as a "harridan" - a worn out horse or a large gaunt woman. She has put the fear of God into many an unsuspecting drinker. 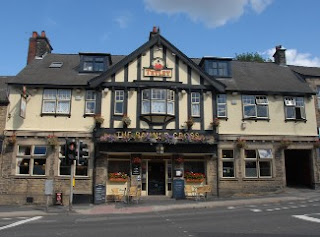 I was down there this evening. There was Irish Joe who came to England in 1961 to begin his building "career". His Irish brogue remains as broad as it must have been when he stepped off the boat forty seven years ago. There was Bert from Northampton who worked manually in the concrete industry till he was sixty five. He was singing songs tonight - "Burlington Bertie from Bow" and "The White Cliffs of Dover". In spite of his extremely hard life, he is a very nice man who never thinks ill of anyone. Then there was Mick the Plumber (not John McCain's daft Joe the Plumber) - he was very tired after a week working away on a building contract in Blackpool.
Other people I often see at "The Banner" include the perpetually unemployed and unemployable Gibby whose aged mother is racked with rheumatoid arthritis. He keeps saying that he hopes she hasn't fallen over again as he sups his fifth pint of lager beer. Then there''s Derek with his various dogs, tattoos and roll-ups. He can't read or write but he always shakes my hand and asks me about my family. To use a term from Philip Larkin, I think of him as a "loblolly man" - he makes money by painting people's houses when and if he feels like it. He's a very good worker who takes pride in his painting and I have always been rather jealous of his free and easy approach to work. Unlike me, he is very much his own boss.
Big Dave has just got back from a week's holiday in Brazil where he met one of the Great Train Robber - Ronnie Biggs's best mates. They drank beer in a Rio bar and went for steaks that you paid for on the basis of weight. Lonesome Dave is obsessed with money and things financial and has an uncanny knack of turning conversations that way - territory that frankly makes me yawn. He's always advising me about pensions and savings but I don't care about things like that. I like poems and songs and brilliant goals, stunning photographs and beautiful objects - not how much interest I might make on a thousand pounds or how much I will need for a solvent retirement.
There are plenty of others - Irish Pat, Roman the barman and James the son of Irish Pat, the obnoxious Leeds Mick, Jim the Sheffield Wednesday fan who never sits down and the gardener Dave Glossop who is Sheffield United crazy. There's Barnsley Paul and Mr McCraig, Dimitri the Greek jeweller with his English wife Jo, the quiz kings Richard and Jonathan, brothers-in-law Roy and Mike, Welsh Geraint and the Spanish lass Maria who lives on Glenalmond Road. Jamaican Murray whose wife died in July and Tony the Kurd with his kebab shop.
It's an English pub - my local - and a great leveller. Who cares if you are a builder or a lawyer? Who cares if you have travelled the world or made a million, fought in Iraq or fought in a night club? Who cares if you are a secondary school teacher working up to sixty hours a week and stressing out about targets and the stupid National Challenge? Who cares if you are fat or thin, male or female, young or old? The English pub is a national treasure. Nowhere in the world have I found a facility like it, so roll out the barrel and let's all drink to the future of the great English pub!
- November 29, 2008