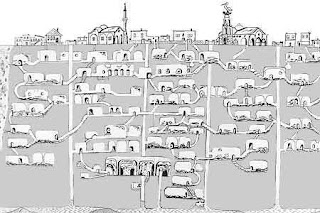 My Monday night pub quiz chum - Michael from Oldham - told me about a place in Turkey that I had previously never heard of - Derinkuyu in the Capadocia region. This vast and amazing underground city had been long forgotten until a local resident accidentally rediscovered it in 1963. It seems the city was first carved out of the bedrock between 800 and 700 B.C. for reasons of self-preservation in a time of tribal and religious instability. Archaeologists are still exploring Derinkuyu's eight levels of corridors, homes, kitchens, wells, meeting places, stables and ventilation shafts. They believe that the hand-carved warrens could easily have housed ten thousand people. In a way, it's a bit like JJ at "All Cobblers" ' story of the Terracotta Army in Xian, China - a vast archaeological treasure that had been buried by the sands of time.
What other mysterious treasures remain in a world where we seem to have striven to catalogue everything - photograph everything - as if through that process of recording we can demystify and master our planet? Perhaps I'm a romantic but in many respects I think the original Australian aborigines knew more than we know now. The urge to classify and demystify may be missing the point. 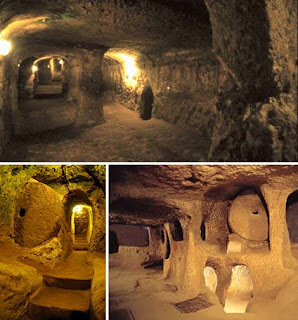