Would our Flymo Compact 350 lawnmower hold out till the autumn? Now there's a question. Forget the recession and this nation's tragic adventures in Afghanistan - what really mattered and still matters is/was our lawnmower. In our salubrious Sheffield suburban idyll, we have a lot of grass to cut. The garden is 43 metres long - being the sad git I am, I once measured it. Much of the garden is verdant and where there is grass there must be lawnmowers as the age of the scythe and the sickle is almost over in England.

Back in 1981, when Shirley and I tied the marital knot, my kindly sister-in-law Carolyn gave us a second hand basic Flymo lawnmower. At our first house, there was a tiny amount of lawn but I used it through the eight summers we lived there. No problem whatsoever. I brought it to this house with its vast prairie leading to distant savanna and I used that old mower for twelve further years and do you know - we never had it serviced once. The machine would still be working today if I could have sorted out its iffy wiring. Instead we opted for the modern world of lawnmowing and purchased with supermarket reward vouchers and a little cash a magnificent Flymo 350 Compact.

For eight years this sturdy machine did its job magnificently until the day my impatient wifelet decided to drag it from its resting place in our "underhouse". I was ill at the time. I had explained to her often before that it was like a hovercraft and did not have wheels beneath. The impatient dragging process dislocated the safety drive handle mechanism and in spite of my best efforts to rescue that orange and gorgeous piece of horticultural technology, it died.

But nothing lasts forever. Time to purchase the third lawnmower of my life. Research - that was the key. I checked out the various models available and their prices at different stores. This time I was going to go for a rotary mower so that the wifelet could wheel it out from the underhouse without attracting my best expletives. Finally I settled on the "Spear and Jackson" 37" bladed rotary mower from "Argos". 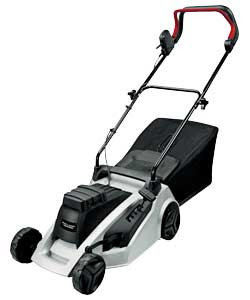 I tootled into the city centre and entered the Argos Extra store on Angel Street. I was not a little excited - after all a man's relationship with his lawnmower is arguably more fulfilling and pleasurable than any association he might form with a woman. No lawnmower ever objects when you lift its lid and it goes whenever and wherever you want it. When you're done with it you put it away until you are ready to use it again.

Upon returning home, I had the arduous task of assembling the new machine. There were the handles to screw in and the grass box to clip together. After forty minutes, the beast was ready. Out onto the hallowed turf - plug in and off we go! For ten long minutes she gobbled up our grass which had grown slightly long - but no more than four inches anywhere. After fifteen minutes, I noticed a little wisp of smoke rising from the motor. I switched off immediately but it was no use. My new Spear and Jackson in its stylish grey and black livery was kapput. I was looking forward to at least ten years of reliable service but I got little more than ten minutes.

The useless mower had to be dismantled, re-boxed and driven back to Angel Street where the customer services lady was slightly accusatory until she met a torrent of articulate stubbornness from yours truly. I felt like saying "Smile! You've been Yorkshire Puddinged!" She even tried to get me to give back the £5 voucher I had earned in the morning for spending more than £50 until I asked who would be paying for my parking ticket, extra petrol and time. What would have been nice was an apology for selling me a piece of junk but instead I had to settle for my money back. Perhaps I should go on the Internet to see if I might locate a better lawnmower in Thailand or The Philippines. Mind you - I noticed the one that broke down was made in China. The clue was obvious in those traditional Cantonese names - Spear and Jackson.