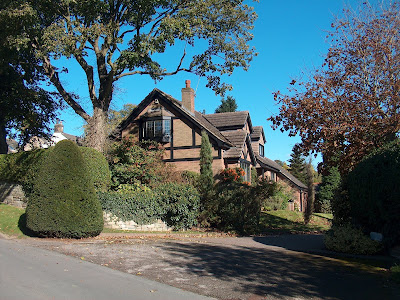 Like Beverly Hills - Croft Close in Whirlow, Sheffield (taken yesterday)
Thirty five years ago, I was in a conversation with two American camp counsellors in darkest Ohio. Although high school graduates and now college students, they had it fixed in their minds that England and London were synonymous. To them the fact that Elton John and The Beatles were English automatically meant that they came from London. Neither of them had ever heard of Yorkshire.
London remains a dominating presence in the world's perception of our great country. Internally, The English media remain very Londoncentric. We northerners are used to weather reports which tell us we have enjoyed a lovely, warm day when it has been raining Up North and conversely when we have enjoyed fine weather, we are sometimes told that the thunderstorms and high winds will continue into tomorrow. It's the same with Sunday newspaper restaurant reviews. There'll be a dozen reviews of London restaurants followed, almost grudgingly, by a review of a distant Cornish fish restaurant or a gastro pub in Harrogate.
It's always been this way. We northerners are used to it. Many Londoners and southerners have never travelled further north than Watford. Beyond it - "There be monsters!" When the Olympics come to England in 2012, we northerners will not only need to buy tickets at extortionate prices but we will also have to pay transport costs and perhaps book ludicrously expensive accommodation packages as well. Londoners will only need to buy events tickets.
I can't find anything out about the bloke but in 1936 "The Daily Express" - loyal mouthpiece of the Conservative Party and leafy London suburbs - employed a journalist called R. Stephen Williams. He must have been sent on some kind of exploratory mission to Sheffield. The resulting rubbish he then spouted to his loyal readers from Tunbridge Wells to Royal Ascot would no doubt have simply reinforced existing prejudices about northern cities. Though dissipated, some of that venomously misguided attitude towards The North remains even in today's journalism. This is what R. Stephen Williams wrote:-
"No nation can boast civilisation while it has the shame of Sheffield to face.
It is the graveyard of the intellect, the ash-heap of culture. It contains some of the ugliest buildings in England. It sprawls, a hideous misshapen mass, in the midst of some of England's loveliest country.
Sheffield is a workshop; a workshop in which men have made money and made nothing else. It is a city without vision. Consider the way it has grown up, like a dirty, neglected child.
It is a city without a sense of beauty. I did not see a single beautiful woman in Sheffield. I did not see a single man who carried himself with any pride or demeanour or walked in any way that did not suggest that he was looking for sixpences in the gutter and was failing to find them."
It seems to me that R. Stephen Williams must have arrived in the city with entrenched prejudices towards this country's industrial cities - the very engine rooms of our nation's wealth and former empire - the same cities that provided cannon fodder for the wars we found ourselves in. His England was no doubt an England of tea parties, fox hunting, The Henley Regatta, bowler hats and brollies. He didn't know what he was looking at and in spite of his Etonian command of language didn't know what he was talking about. Things are certainly better now but the vicious toffee-nosed elitism of London and the south east has not entirely gone away - that's for sure. 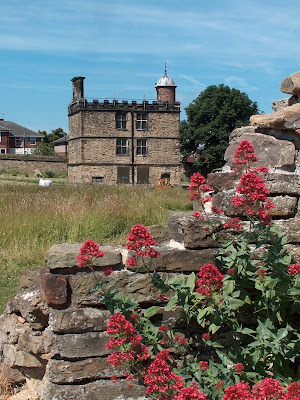