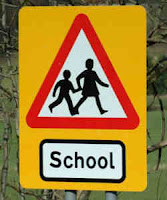 Since I walked out of the school where I worked for twenty two years - in July 2009 - I hadn't been back in a school even for a moment. Schools have been very important in my life - backdrops to just about everything.
I was born in a school house attached to the village primary school where my father was the headmaster. Even at the age of three, I would toddle next door and roam around the classrooms, sometimes sitting on the older children's knees. And one Christmas, when I was fifteen, and Mr Assert, the caretaker, was stricken with flu, I replaced him and scrubbed and polished every floor in the building as well as washing down every table, chair and blackboard.
At eighteen, after A levels at Beverley Grammar School, I was a VSO volunteer teacher in the Fiji Islands before commencing my degree at the University of Stirling in Scotland. My joint honours course was in English Studies with Education. I spent a lot of time just visiting local schools before my final teaching practices at St Mungo's Academy, Alloa and Alva Academy in Clackmannanshire.
Then I returned to the beloved fatherland - Yorkshire. I taught in the pit village of Dinnington for three years before moving into Sheffield where I secured a post at the truly comprehensive and progressive Rowlinson School. Six years there before being sentenced to twenty two years in northern Sheffield.
In addition to these locations, I visited many other primary and secondary schools in the course of my career - either as an examiner, moderator or primary-secondary link person. Of course, from time to time. I would also visit my own children's schools for parents' evenings, carol concerts, sports events or open days.
I know that upon leaving school, some people never go back. They advance their careers in whatever field they have elected and the idea, the memory of schools is left far behind in the dim and distant past. But for me this wasn't so. It was all school, school, school till my recent fourteen month break. Then on Monday afternoon this week, I went back into a school - a secondary school in south eastern Sheffield. I'm planning to earn a little pin money through a scheme called "One to One Teaching". Monday was earmarked for the preliminary meeting.
I wish I could have photographed the school's "One to One" co-ordinator's desk. It was so chaotic and jumbled. There was a little Tupperware lunch box containing uneaten sandwiches and on top, a half-eaten red apple. There were various atlases - some closed, some open. A battered brown leather briefcase had spewed its contents on to the teacher's chair. There was a collapsed pile of red exercise books, a copy of the school's glossy prospectus, a couple of screwed up balls of paper, various felt tip whiteboard pens - several with missing lids, a bunch of keys, minutes of meetings, packs of pencil crayons and a small white plastic troll with purple hair.
The co-ordinator, though pleasant enough, seemed driven by a diet of amphetamines. I heard about her husband, her regular drive home, her planned Geography field trip to Scarborough, her general lack of free time. It was all stuff I didn't want to hear. And it became clear that the "One to One" scheme the school proposes hasn't been thought through very much at all. She even said that if needs be, tutors will be given two students a session. Doh? "One to one"? What does she think that means?
Well I'm going to go with the flow, get out of the house, and perhaps earn a nice wedge of extra cash before Christmas but what the co-ordinator doesn't appreciate is that if it's not right for me, I will simply walk away and tell them to stuff their ill-planned scheme. Although schools are in my blood, I don't actually need them any more. 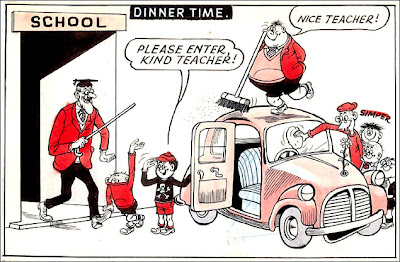