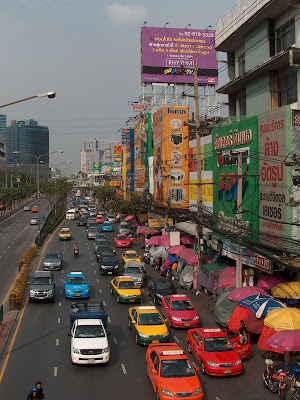 Voices are rarely raised in Thailand. People communicate with each other in a quiet, courteous manner. It is the same out on Bangkok's busy arterial roads. Often there'll be three lanes of clogging traffic with drivers skilfully weaving in and out of their lanes to gain some forward motion. But nobody's honking. No fists are raised. No road rage boiling over. Just brightly coloured taxis, buses, limousines, battered old Toyotas in a traffic jam dance.
In the school itself, I have yet to hear a teacher properly raising his or her voice in anything resembling annoyance. There's no need to play that card because the students are calm, dignified, compliant and cheerful. They support one another. On Tuesday I read out Peachy's creative writing to her Y9 class and when I had finished, the whole class applauded spontaneously - not my delivery but Peachy's splendid effort. There wasn't a hint of irony in that applause. No surly, snarling, teenage cleverdickery - just smiling young people acknowledging their classmate's work. How very refreshing this is for me. Like a daily medicine.
And I love the way in shops or restaurants, the humble Thai greeting will often accompany transactions. Palms together, head slightly bowed, hands moving from heart to head - "Kop Kun Kap" - thank you. In the depths of a sprawling modern city, the character of old rural Thailand has not been forgotten.
- March 10, 2011