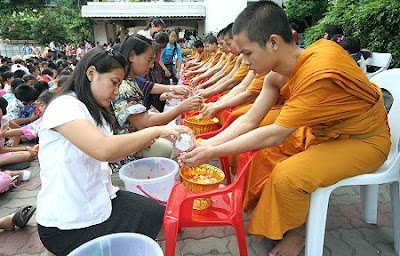 Songkran begins on April 13th and is a very special day in Thailand's calendar for it marks the beginning of the Buddhist new year. We are currently in the year 2553, about to move into 2554. "Songkran"means moving or passing forward. Today my international school with its motto: "Where East Meets West" broke up for its three week Songkran summer holiday.
This morning something very special happened. All teachers sat behind a line of low tables with our hands held over silvery basins. Then the pupils came shuffling along on their knees clasping smaller silvery bowls filled with water and petals. Every pupil in the school poured a small amount of water over my hands as they shuffled down the line. It's all about cleansing and wishing elders good luck for the year ahead. And do you know, every single pupil poured their water with good grace. There was no stupidity. No students opting out or making wisecracks. They did it with respect and affection.
Shirley will arrive in Bangkok on Sunday evening. I guess she will be as shattered as I was when I first arrived. It took me longer than expected to adjust my body clock. I will meet her at the airport and then we will probably have an evening meal before bedtime. On Monday, if she's feeling up to it, we will take a ferry from Nontaburi, down the river to the Golden Temple and Wat Pho Temple where the famous reclining Buddha resides. Perhaps we will both have massages in the air-conditioned parlour in the temple grounds. In the early evening, the owners of my little B&B have invited us for dinner at their riverhouse. The owner speaks very good English for he worked all over the world in his younger days on behalf of the Thai Tourist Authority. I know it is a privilege to be invited as farangs (foreigners) into a Thai home.
Early on Tuesday morning, I'm taking Shirley back to the island of Koh Chang for five days. I hope the weather is kind to us - not too much tropical rain. I want to take her snorkelling - viewing beautiful tropical fishes in their protected marine park - as well as riding elephants through the jungle to their bathing pool. And we will laze about at the Whitesands Resort where our beach hut will look out directly on a palm fringed beach as the warm blue waters of the Gulf of Thailand lap at our doorstep.
Later we will visit one of Thailand's ancient capitals - Ayutthya - about two hours north of Bangkok. I have booked a rather lovely hotel there which gets a high 9.0 rating on "Trip Advisor". It's a bit of luxury - especially for Shirley. After all, the rest of the time she's in Thailand she'll be in this B&B in Bangkok or in our tiny and fairly primitive beach hut at Koh Chang.
When she departs on April 7th, I'm heading north to Chiang Rai - just seventy miles south of the epicentre of yesterday's earthquake - which was just over the border in Burma. I hope to slip over into Laos for a couple of days before heading back to northern Thailand's main city - Chiang Mai for the Songkran Festival proper... Well my friends, somebody's got to do it.
- March 25, 2011