Yesterday afternoon, I escaped from our Olympic sofa and drove westwards into the Peak District again. I parked near Cutthroat Bridge on the A57 and followed a track under Hordron Edge. My mapwork had told me there's an ancient stone circle on the plateau above Hordron Edge. I battled through lush bracken to the top and there it was, protected by a handful of sheep and rarely visited. Who knows what happened here? Did those Bronze Age people dance under the stars? Did they come to trade or to observe the shadows? And what did they know of the world beyond those moors? 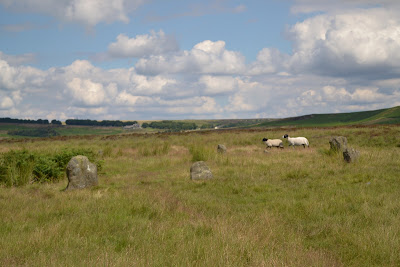 Half a mile to the north is Stanage End - the westernmost point of rugged Stanage Edge - a millstone grit escarpment that curls for four miles along the old border between Yorkshire and Derbyshire.  I tramped through marshy ground and vigorous bracken fronds, over rocks and down hollows until this sight appeared. If you click on the picture you'll see climbers to the left of the outcrop:- 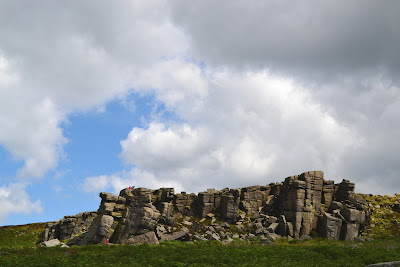 Further along the edge at Crow Chin, I spotted this old grouse basin - Basin Number 20. It was hollowed out over a hundred years ago to allow breeding grouse access to fresh rainwater rather than acidic moorland pools:- 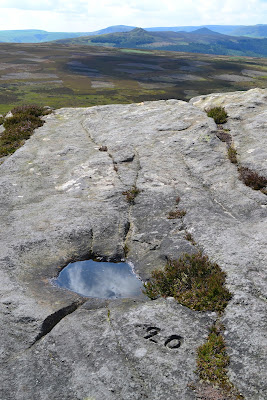 A lovely view from Crow Chin westwards to the Derwent Valley:- 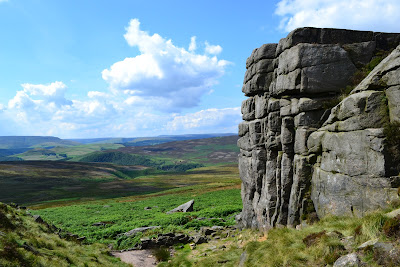 Much later after tramping from Bole Hill, past Bamford Clough and along New Road, I descended to "The Yorkshire Bridge Inn" where I guzzled a refreshing pint of orange cordial and soda water before standing on the dam wall at Ladybower Reservoir. When full, it holds over six billion gallons of water. Below you can see a device called a "bellmouth" which drains away excess water when the reservoir is overfull. That's one hole I wouldn't want to fall down. AIIIIIIIIIEEEEEEEEEE!   Plop! 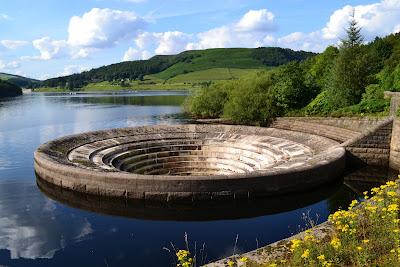