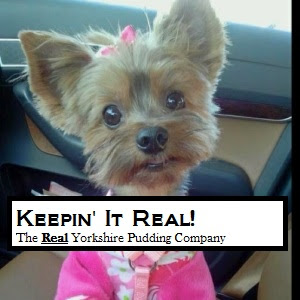 Above you can see a mock up of a screenshot from the planned first TV commercial for Real Yorkshire Puddings. The ads will star a Yorkshire terrier called Ian - also pictured above. The creative director for the ad campaign is currently on location in Angola shooting ads for a garden pond company. He is none other than Maurice T. Gowans, former soldier, goatherd, whisky distiller  raconteur and life member of the Synod of the Church of England. In his application for this prestigious contract, he offered three mouth-watering scenarios for the commercials  - all featuring Ian the terrier. The Board were suitably impressed.

SCENARIO ONE
I see a man sitting at a kitchen table eating a RYP. Behind him you see a Yorkshire Terrier repeatedly leaping into the air, whatever it is he is leaping for is off the top of the screen. Sound of front door opening and a woman’s voice, ‘I’m home Love, I hope you gave the dog plenty of exercise, you know he gets restless at night if he doesn’t!’ ‘I did Love’ he replies. ‘I expect the exercise did you some good too?’ She says. ‘Oh yes!’ he says popping the last of the RYP into his mouth whereupon she walks in and stops dead in her tracks with a look of amazement. Then you get the full shot of the kitchen showing a RYP hanging from the ceiling light just out of reach of the leaping terrier. The advert could end with something like ‘Real Initiative… Real Yorkshire Pudding!’

SCENARIO THREE
Man puts a banknote into an envelope and gives it to terrier who takes it in his mouth and trots off down the street. Dog comes to pelican crossing and sits down while he waits for little red man to turn green whereupon he crosses street, goes into shop and gives envelope to shopkeeper. Shopkeeper puts RYP and change into bag and dog trots off back home again. On the way dog sees gorgeous female terrier (cue romantic music) whereupon the two of them gambol off into the countryside and enjoy a romantic meal for two of RYP naturally. Terrier arrives home and man looks in bag and sees only a few crumbs of RYP and his change. Man looks a terrier enquiringly whereupon terrier looks towards door and female terrier appears. ‘You old Dog!’ says man affectionately. 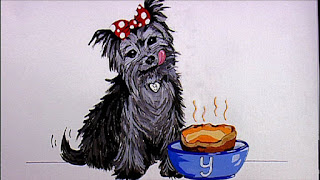