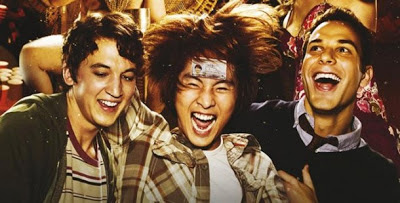 The other evening Jon and I hoped to see "Flight" starring Denzil Washington at the local cinema but sadly it had just disappeared from the schedule so instead we went to see "21 and Over" which was one of the most abyssmal films I have ever seen. This American "frat-com" manufactured by Jon Lucas and Scott Moore of "Hangover" fame could be summed up in one word - "shallow". The plot was so thin and predictable that it was like tissue paper and I was annoyed by the amount of unnecessary swearing that pervaded this college town night-time drunken "adventure" in which central character Jeff Chang was forced to go out boozing on the night of his twenty first birthday - even though he had an important med school interview the following morning.

The film had no redeeming features and I thought to myself that if I were a militant Islamist, this movie could be useful propaganda in highlighting all that is wrong with western - particularly American society. It was truly awful and it's such a crying shame that something like this ever saw the light of day when there are so many thousands of creative people out there who could produce much better filmscripts over breakfast. Please don't see it and advise anybody you know to shun "21 and Over". It's a disgrace.
- March 09, 2013