Three and a half hours - that's how long I spent at the Department of Immigration this morning. It is a huge modern building on the northern outskirts of Bangkok - miles from anywhere. I was there for two reasons. Firstly, I had to extend my work visa because my teaching contract was recently extended from the end of March to May 3rd and secondly I needed to acquire a re-entry visa because I am leaving the country on Saturday for just over two weeks. This flag will tell you where I am bound...and it is there that I will meet up with Shirley who has a week off work:- 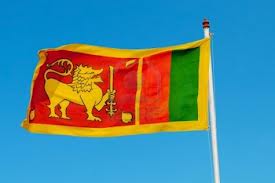 And of course, as if you didn't know! It is the flag of Sri Lanka - or as I still prefer to call it - Ceylon. There was political mischief behind the changing of the teardrop country's name.

So anyway, I have got my first supermarket deli ticket and I am sitting in the waiting area adjacent to the many "N" booths. A robotic female voice with a Thai accent chants the evolving appointments - "Tick-et-num-ber Twoah Threeah Zero, Counter (dramatic pause) fourtEEN (Rising to a robotic crescendo)". The appointments are also listed in red digital displays but the "N" section's lady robot's increasingly irritating voice is in competition with the lady robots from the other sections. Their soulless voices are identical and they interlace like spindly fingers.

When you finally get into a glass booth to see an immigration official in an immaculate army-type uniform, she or he goes mad with the old rubber stamps before sending you out to wait for another half hour - only then being allowed to pick up the amended passport. At least today I didn't encounter the cheeky female official who laughed at me in 2011 and said I looked like Colonel Sanders..."Oh yes dear, I'm a finger-lickin dead ringer for Mr KFC!" (Not!)

There are hundreds of other perplexed aliens in the Palace of Bureaucracy - maids from the Philippines, construction workers from Burma (not Myanmar), Welsh chicken farmers, Cambodians, Indians, beachcombing hippies from California and Canton GA and other farang (foreign) international teachers like me with school bureaucrats in tow. I was with the delectable Khun Lek who - in spite of only knowing a dozen English words - is my school's visa liaison officer for foreign staff. But I will give Lek her due today. She managed to bully or charm the officials into giving me my re-entry visa just before the shutters went down for an hour's lunch break. Well, what does it matter if hundreds of visitors have had to traipse out to the suburbs in taxis, waiting in snarled traffic jams, missing hours of work? What really matters is that the army of officials can have their noodles and their Tom Yum soup, their "Daddy Do-nuts" and their Colonel Sanders specials. Let the buggers wait.

So with passport sorted and reservation sheets now printed, I am just about ready for Ceylon where apparently foaming, rabid dogs often fight with equally bad-tempered monkeys. Nice.
- March 28, 2013