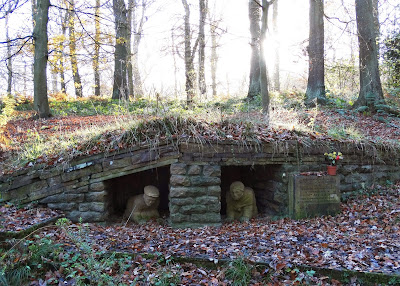 As you can see, the sun was in the wrong position as I snapped these photographs to the south of Silkstone Common - during another four hour country ramble. It's an area that watched the development of coal mines from the early nineteenth century through to their eventual demise under Thatcher.

On July 4th, 1838 a heavy summer thunderstorm discharged its watery burden over Silkstone and Stainborough. The rain was so bad that it effectively put out the coal fire that was used to power the primitive elevator at Moorend Colliery. A message to that effect was sent below.

Reaching the end of their long shift, a group of child workers decided to do what they had done before. Instead of waiting for the lift to be re-fired, they began to wriggle along an old  ventilation drift tunnel. It used to be part of the earlier Huskar Colliery and would bring them back to the surface in Nabs Wood. But before they could emerge, the little stream that flows through the wood had become a raging torrent and debris had forced a diversion.

The waters gushed into the escape tunnel and twenty six of those child miners were tragically drowned. There were girls as well as boys and the youngest child - just seven years old - was named Joseph Birkinshaw.

Though there was already a monument in Silkstone churchyard, the people of Silkstone Common wanted another memorial close to where the disaster happened and this was duly built in the nineteen eighties. I very much like the realised design - showing statues of two children working in typically cramped conditions.

It's hard to imagine what it must have been like for those poor children. Not just the awfulness of their drowning but simply slaving for twelve hours a day in cold, black tunnels with only stubs of candles to illuminate their brutal labour as they hauled coal away from the seam or hacked at it with primitive tools. They should have been running through the summer woods, enjoying the light and the sun upon their skin - not crawling around far beneath those woods for measly pennies at the behest of profit hungry mine owners to whom even the lives of small children were expendable.

And though there are still many child labourers in this world, I am thankful that my children didn't have to descend into the darkness with poor little Joseph Birkinshaw - God rest his soul. 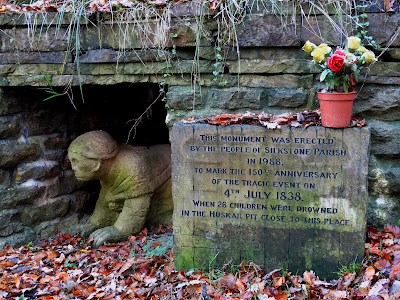