Continuing my account of our American west coast holiday in 2005...

It is almost three hundred miles from Santa Monica to Las Vegas. You traverse greater Los Angeles on wide concrete highways till you reach Route 15 and then at last you are out in the countryside. But it's not like Derbyshire. No green fields, quaint cottages or grazing sheep. Instead you are in a dusty desert landscape where cacti thrive and occasional joshua trees suggest you might have arrived on a different planet.

Across the Mojave Desert to the Nevada border. The traffic is light and there are sun baked mountains in the colourless distance.  Our black jeep is in cruise control and the road is as straight as an arrow.

Then shimmering in the distance we see a city where no city should exist. Is it perhaps Oxford with its dreaming spires or the new Jerusalem? Palmyra or possibly The Emerald City itself? No. It's Las Vegas which in English means "The Meadows" but as we get closer we see no meadows - only a sprawling concrete settlement that owes its existence to gambling and entertainment.

Imagine that! Not a city built on steel or fishing or ship-building or banking but a city built on card games and sequins! Incredible. In 1905 the population of Las Vegas was just 25. Now it's home to 600,000 souls and always a temporary home for thousands of visitors. It is to the western world what Mecca is to Islam.

Vegas has its famous neon strip and north of that there's the old downtown area. Our budget hotel was between the two - the tastefully named Econolodge. We had two large connecting rooms and a kitchenette. Cheap and perfect for our needs.

Though I was happy enough to accompany Shirley and the kids as we wandered around Sin City, our prime reason for going there  was to use it as a base for visiting the nearby Grand Canyon.

There are lots of different ways in which tourists can experience The Grand Canyon. We had chosen to fly to it, landing on a remote airstrip near the Bar Ten Ranch. There I met a real life cowboy called, I kid you not, Hank - a lovely man in his eighties who had worked cattle all his life in the rugged hills of Arizona. He was now part of the Bar Ten furniture and enjoyed chatting with visitors from all across the world.

After a rustic cowboy lunch, we climbed aboard a rough terrain vehicle and headed down to the canyon along a dusty desert track. Then we wandered around the rim of it, high above the Colorado River and marvelled at one of the planet's greatest natural wonders.

I would have liked to wander longer but after an hour we had to get back in the ranch's open-sided vehicle ahead of our flight back to Vegas over Boulder Dam. Before flying back, we were invited to engage in some skeet shooting or what we English folk refer to as clay pigeon shooting. I have a built-in antipathy towards guns but it would have appeared churlish not to join in. The recoil on my weapon just about dislocated my shoulder and of course I missed all of my skeets by a mile. Even so it had been a magical excursion. It was early evening when we got back to the city where its seductive neon lights were already dancing. 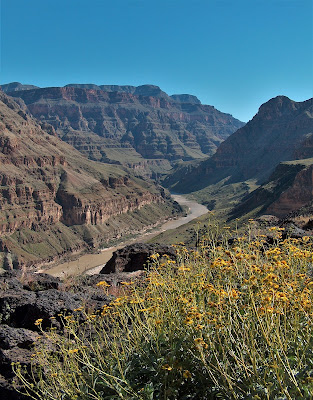 That night Ian put a couple of quarters in a one armed bandit and won twenty bucks but I don't like casinos. They seem like alien places to me. Places I don't really understand and I would never waste money in them. After all, it is so startlingly obvious that in the end the casinos always win. Where's the fun in that?

Las Vegas is a vulgar place. I had the same feeling there that I had in Lourdes near the Pyrenees. A feeling of detachment - as if I didn't entirely belong to the race of humans I saw around me. Three nights were enough. I was happy to leave that crazy place and head out of the desert - back to California...
Will you take me as I am?
Will you?
- January 13, 2018