Behind the old farmhouse, there is a hollow in which a sheltered meadow rolls up to the woods. At present, it accommodates  a llama and several sheep that have recently given birth to lambs. And there's a goat or chèvre called Maurice Chevalier.

Yesterday afternoon, after I had returned from the Lidl store in Saint Jean du Falga, I looked out of the side door and there was Maurice Chevalier munching happily on the long grasses that  cling to the embankment, He looked up at me as if to say, "What you looking at?" and continued to munch away.

He must have somehow got through the field fence. And he needed to be returned to that field.

I put my walking boots on and went out to grapple with Maurice Chevalier. He was unco-operative and faced me up with his head down and lethal horns pointed towards my midriff. As he charged, I grabbed his horns like a matador dealing with an enraged bull. Maurice Chevalier bleated in complaint but it was no good. He was under my control no matter how he writhed or how loudly he bleated.

I led him back down to the field and lifted the barbed wire in order to force him back where he belongs. Yorkshire Pudding 1 Maurice Chevalier 0. When dealing with goats you have to show who is the master. And that primeval battle was yesterday's highlight.

Today there's sunshine and I must get off to walk in it - hoping I don't have to wrestle with any more smelly chèvres. 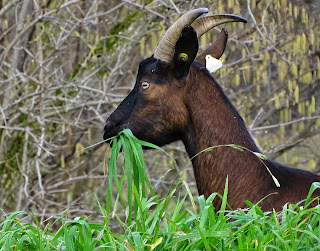