A thick grey canopy yesterday and French drizzle. I did not feel motivated to venture out with Pierre so he stayed on the gravel and I stayed indoors.

I didn't speak to anyone yesterday apart from a half hour phone conversation with Shirley in the evening. I didn't see another human being all day. It was just me and the cats.

I am halfway through "Sons and Lovers". Lawrence was just twenty seven when he wrote it and there are strong autobiographical chimes throughout - feeding the fiction, making it resonate like truth. 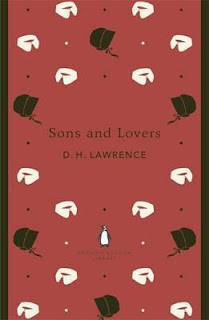 The novel's chief protagonist - Paul Morel is Lawrence in disguise. His relationship with his mother is strong while his coalmining father is ignorant and brutish. Paul falls in love with Miriam Leivers who lives with her family in a nearby farm, just as Lawrence fell in love with Jessie Chambers. Similarly, Paul is weighed down by the social mores of the time, by his mother's protectiveness and by his own inability to surrender to his feelings. Miriam dangles on a string, unfulfilled, confused and hopelessly in love.

Very early in the novel there are references to the ruins of a priory and to "Robin Hood's Well", These locations were within a hundred yards of where I parked Clint last week. And there are other references to the very landscape I walked through. However, as a novelist, Lawrence was not bound to adhere accurately to the geography of his home territory.

It's good to immerse oneself in a book - without distraction. And it's salutary to note that "Sons and Lovers" was published in 1913 - just a year before the so-called "Great War" kicked off  - killing twenty million people. The world was changed for ever but "Sons and Lovers" allows us to glimpse a time of relative innocence before the hostilities began.

And now you will be pleased to note, this morning's literary lecture is over. Time to clean up the cat litter and sort out the fireplace. Maybe another mug of coffee and if the French mist ever lifts maybe a trip to Mirepoix and another healthy perambulation in le pays francaise.
- February 06, 2019