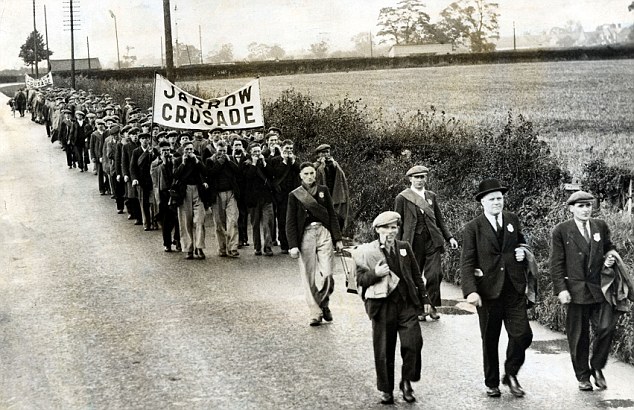 I have just finished a book that concerned The Jarrow Crusade. It is an account of the author's attempt to follow in the footsteps of the marchers - eighty years after the original march happened. The writer was Stuart Maconie. As well as looking back in history, he also reflected upon modern day England and what he observed along the way. "Long Road from Jarrow" is eminently readable and at times thought-provoking.

For those of you who do not know, The Jarrow Crusade was a 250 mile protest march. On October 5th 1936, two hundred unemployed men from the town of Jarrow in the north east of England set off for London. It would take them twenty six days to get there, They intended to present a petition to the government.

A once proud steel and ship-building town, by 1936 Jarrow was on its knees. 70% of  Jarrow men were unemployed and poverty was rife. In desperation, it was decided that the march would happen. It would be a plea for work, for compassion and for government support.

The men made their way steadily down the spine of the country towards England's soft underbelly and the wealth and power that  gather round London. It was like descending upon a different planet. On Friday October 16th, 1936 the marchers reached this city - Sheffield.

Of course, the England of 2016 that Maconie encountered was different in many ways. More traffic on the roads, better welfare protection for the unemployed, less heavy industry, television sets in every home, more comfortable walking boots. Nonetheless, some things never change. London remains a magnet for wealth and privilege and places like Jarrow still feel marginalised, forgotten.

Some of Maconie's political and cultural opinions did not chime with my own views and at times I bristled but he is an engaging writer. Sometimes very funny. It was an excellent project and a fine way to pay homage to the Jarrow men of 1936.  However, it should be noted that while the marchers tramped every inch of the route, Maconie occasionally used buses and taxis to cover some of the miles between. 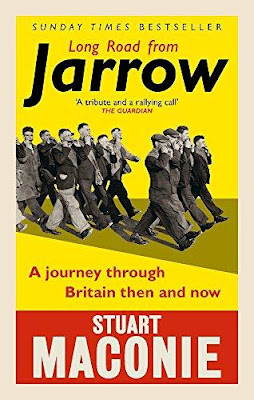