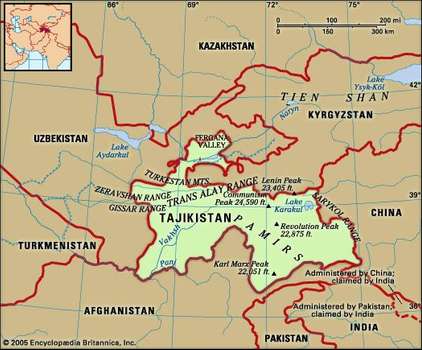 Tajikistan is another country that I shall probably never visit. Some of you may recall that in April of last year I devoted an entire blogpost to Kyrgyzstan. Today it's the turn of Tajikistan. As I begin this post, I happily admit that I know nothing about the country. It's presently just a name. Writing the blogpost - after a smidgen of  research - will teach me as well as you a few things about the mysterious faraway land. Tajikistan...

Astonishingly perhaps , the name means "Land of the Tajiks". They were the original inhabitants of the mountainous country that is sandwiched between Afghanistan to the south, China to the east, Kyrgyzstan to the north and Uzbekistan to the west. Tajiks still make up 81% of the population. 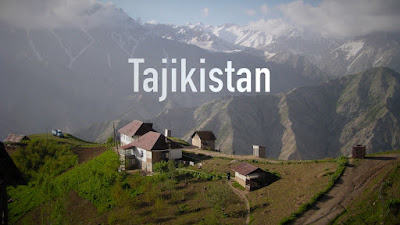 In terms of land area, Tajikistan is smaller than Great Britain but about the same size as the U.S. state of Iowa which is the the twenty sixth  largest state in America. The capital of Tajikistan is Dushanbe with a population of 670,000. The country as a whole is home to over nine million people.

The Tajik economy depends principally upon aluminium production, cotton and income from Tajik workers and businesses located in other parts of the former Soviet Union. It is a fragile economy in what is a landlocked nation. Food production and food imports are a constant preoccupation.

Although the region that we call Tajikistan today has a long and ancient history reaching back through the mists of time, it only formally became a country in 1991 after the break up of the USSR. Thirty years is not a long time in which to construct a strong modern country. The effects of the Soviet era remain almost impossible to shake off.

The current president of Tajikistan is  Emomali Rahmon. He has occupied the position since 1994. In 2015, the nation's parliament passed a law that declared him to be "Founder of Peace and National Unity, Leader of the Nation". Let's hope Mr Trump doesn't get wind of that. Rahmon and his family control the country's major businesses, including the largest bank. Democracy is merely a cloak of pretended respectability.

I can sense you are getting bored so I will draw things to a close with four bullet points about Tajikistan:-
- August 04, 2019