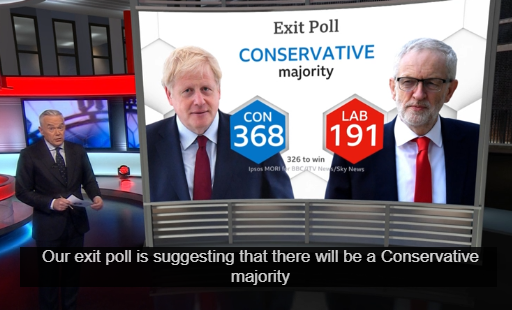 Tonight I am feeling as low as I felt that night in 1979 when Thatcher grabbed the keys to 10 Downing Street. This time the British electorate have apparently given their support to Johnson and his baying Tory mob. I am looking at television and the writing is already on the wall. The Conservative Party is about to enjoy a solid majority in The Houses of Parliament. They will be gloating and guffawing as only Tories can gloat and guffaw.

How on earth could British voters have allowed themselves to be fooled like this? I shake my head in despair. Five years of Johnson ahead and  no chance whatsoever of  returning to the European fold. That ship has already left the wharf.

I spent Thursday working at one of our local polling stations,  arriving there at 6.15 in the  morning and departing at 10.30pm. I had been hoping that the day would bring a hung parliament with a chance of  achieving a second European Union referendum. But that dream is over.

The Tories are in and as I say I  feel terribly low tonight. There are food banks in our country. There are rough sleepers on our streets. There is continuing division. The NHS is in crisis. We are breaking away from The European Union. Thousands of children are living in poverty. And yet, and yet...British voters fell for Johnson's lies, false promises and buffoonery.

He kept saying over and over again "Get Brexit Done!" and an army of fools listened. Hope is lost now. We are entering an unhappier world  with  kindness in retreat. BoJo The Clown is pulling the strings now. Save our Souls.
- December 13, 2019