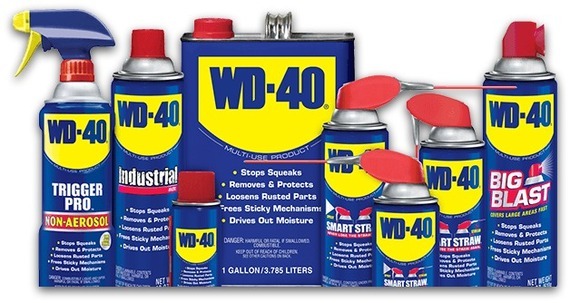 WD40 is one of the most magical products known to mankind. You can fix just about anything with WD40. Squeaky hinges? Try WD40. Nut and bolt seized up? No problem! Just squirt some WD40. Dandruff? Hair loss? Lawn mower problems?  Tar on your car's body work? Tap washer stuck? No matter what your issue is - WD40 can solve it.

Is there a home in the western world that does not possess a spraycan of WD40? Another splendid thing about WD40 is that the cans are everlasting. I have had my current can of WD40 since 1982. As I say - WD40 possesses magical qualities.

I was wondering. What is WD40 and who invented it?

It seems that it was invented in the early nineteen fifties in connection with the production and maintenance of Atlas rockets in San Diego, California. The letters "W.D." stand for "water displacement" and the number "40" suggests that the magical spray which went into commercial production was in fact  the 40th formula tested..

The inventor of  WD40 may have been Iver Norman Lawson but it  could have been Norman B. Larsen. There is a continuing dispute about who was responsible. The product was never properly patented.

Similarly, there is continuing disagreement about what WD40 actually contains. What are its ingredients? The American explanation is rather different from the European Union's analysis but both agree that a petroleum derivative makes up the bulk of the recipe.

Some critics of WD40 have suggested that because of its water displacement properties, WD40 is not a suitable alternative to oil. Sure - it will make moving parts operate more smoothly for a while but in the long run it will have a deleterious effect. However, I expect that all of these critics will have cans of WD40 at home. As most of us know from experience - WD40 is magic!
- December 09, 2019