Being a Hull City fan is not easy when you live sixty miles from the KC Stadium but yesterday we had a home match in Sheffield - a fifth round FA Cup tie against Sheffield United at the famous Bramall Lane Stadium. Question: What is the only sports stadium in England that has hosted both an FA Cup Final and an international cricket test match? Answer: Bramall Lane.

Tony and Fiona, our friends from Hull came over and after a winter warming lunch of homemade cottage pie and broccoli we drove for five minutes towards the match and parked up on South View Road. Our seats were in the upper tier of the steeply angled Halliwells Stand - previously always 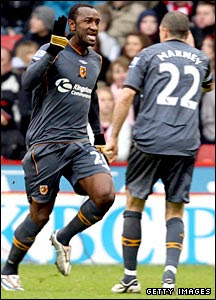 known as the Bramall Lane Stand. You get a brilliant view from up there.
This was a really end to end humdinger of a cup tie with no quarter asked or given. They scored early on though Halford had clearly impeded our defender by climbing on his back before nodding the ball in past a flailing Boaz Myhill. Bring back Matt Duke!
After thirty four minutes, we won a corner at the Kop End and our elegant and athletic central defender Kamil Zayette from Guinea in Africa rose above his marker to repeat Greg Halford's feat. Halftime and it was 1-1 but we were clearly on top and The Blades looked blunted.
After the break we had two stonewall penalty shouts but the referee must have been looking elsewhere. The second one - a blatant trip on Richard Garcia was as clear a penalty as you could wish to see. The game trundled on - end to end action - yellow cards being held up but only for offences by Tigers players - two United players going off with injuries - including the brutish Chris Morgan. The whistle went to signal a replay in a fortnight's time.
After the game we dutifully visited the home of two United fans - one of whom works at the health centre with Shirley. I had never met her or her husband or twelve year old daughter before. We drank tea and ate some delicious "lardy cake" from Oxfordshire. Rather like firm bread pudding but in cake form.
Later on, we returned to Spital Hill near Burngreave to visit one of Sheffield's best kept secrets - The Kashmir Curry Centre. For under ten pounds each, we enjoyed a simple but authentic Kashmiri curry meal with delicious Peshwari Nan bread and pea and potato rice. Because it is unlicensed, as I think I have said before in this blog, you have to nip across the road to The East House pub for pints of real ale which rather gingerly you carry back seeking not to spill a single drop. It should become a new Olympic sport! 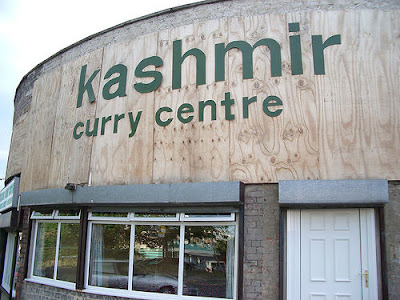