In the first three or four years of my life, my family didn't own a television and when we finally got one, it would show only one channel - BBC - which in those days was only in black and white and came on around teatime, finishing just before midnight with the national anthem. It was all rather primitive and a poor subsitute for the full colour real life adventures I could have as I grew up in and around my East Yorkshire village.
In the summertime, I would sometimes be away all day on my bike with my mates. We'd build dens by tunnelling into haystacks, swim in the local canal or liberate rowing boats. We found clay in the banking of a drainage dyke and then made pottery that we baked in the sun. We watched piglets being born and a farmer shoeing the village's last working shire horse. We played football till it was dark and scrumped apples. In lots of ways it was a truly idyllic childhood when the world around me felt both safe and interesting. There was absolutely nothing to worry about and plenty to laugh about. At night I read voraciously then slept solidly till morning.
Returning to television, between the ages of five and seven there were three children's programmes I grew to love. "Andy Pandy":- 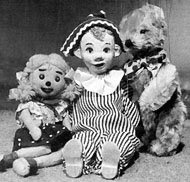 "Bill and Ben", the Flowerpot Men with the surreal Little Weed:- And my all time favourite - "The Woodentops", the forerunner of all those soap opera families that inhabit our screens nowadays but secure, warm and innocent like the family which I was lucky enough to to be born into:- 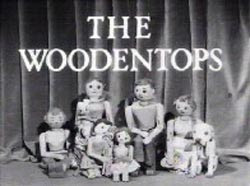 Somehow you could forgive the black and white and the strings, the jerky movements, the predictable plots and the posh voice of the narrator. It was all as comforting as my mother's mashed potato on Sundays, in which we made gravy lakes and imagined little climbers scaling those snowy peaks - like Edmund Hillary and Norgay Tensing. It seems - it seems... like yesterday and yet so long ago...
- February 18, 2009