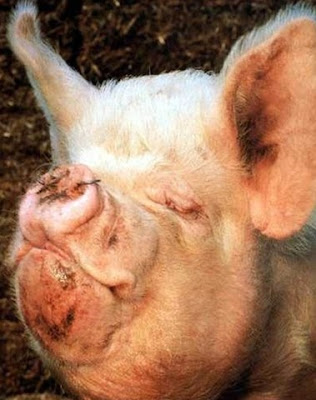 To enlighten non-UK visitors, Sir Fred Goodwin was until very recently the Chief Executive of the Royal Bank of Scotland. He presided over record losses - well over £20 billion through unwise financial marriages and then, cunningly, wriggled his way out of his post to retire at fifty years old with a £690,000 a year pension for life. And they say that crime doesn't pay!
This is part of what Wikipedia had to say about the greedy pig:-
In 1990 Goodwin married Joyce Elizabeth McLean, and they have two children. One of his hobbies is restoring classic cars - the first, a Hillman Imp, bought from the proceeds of a summer job; another, a Triumph Stag he spent years restoring. He is also a keen golfer and Formula One racing fan. Other pastimes include shooting - once a year he would go on shooting trips to Spain with Santander chairman Emilio Botin....
FRED Manuel! Buenas dias! Nice to see you again!
EMILIO It's not Manuel! He was that stupid waiter in Fawlty Towers. I'm Emilio. Remember?
FRED Och aye. Si Si Amigo!
EMILIO And don't try to talk in Spanish Fred! You're as bad at Spanish as you are at restoring vintage cars!
FRED Whaddya mean?
EMILIO Well that Triumph Stag! You spent years on it and it's still a battered old rust bucket.
FRED Screw you Jimmy! Ye greasy dago! You try restoring an old banger with trotters!
EMILIO Talk to me like that senor and there'll be no shooting today!
FRED What are we shooting anyway?
EMILIO Nothing! Well nothing with bullets! That's just what you tell Joyce. We're going down the zona rosa. Gonna get hammered Fred The Shred and then we gonna find ourselves a couple of hot senoritas.
FRED Emilio! Ye cunning banker! (Mobile phone rings) What? ABN Ambro? Aye buy 'em! ...Investigation? Naw! (Rings off)
EMILIO You shouldn't have oughta done that Fred!
FRED Why not?
EMILIO Santander were looking at em. ABN Ambro is - how you say in English - buggered.
FRED Holy shit!
EMILIO Hope you've got a good pension plan.
FRED Don't worry about that Emilio. I'm not a knight of the realm for nothing. Now let's get down the zona rosa.... Taxi! Taxi!
- March 03, 2009