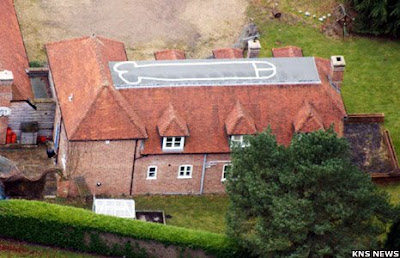 Did you catch this story? The eighteen year old son of a wealthy Berkshire landowner apparently climbed up on the roof of the family home and painted an enormous phallus there - an estimated sixty feet long. The son is currently travelling abroad. His parents say he will have to scrub it off when he gets home. That chimney had better watch out! It's thought the offending item has been up there for over a year and may have remained unnoticed if it wasn't for a passing light aircraft. The pilot probably thought it was a signpost to business celebrity Alan Sugar's mansion!
Don't you agree that acts of relatively harmless mischief are part and parcel of wholesome living? My Irish builder friend Joe has a dirty white van and I have been known to write mischievous things in the grime with my index finger - "Ireland RUFC Team Bus", "Joe's Love Wagon", "Donegal Or Bust", "Union of White Van Men" etc..
At Mediterranean hotels, you will find ignorant and selfish guests claiming sunloungers with towels long before they arrive to lie on them. Once in Minorca, I noticed how some guests laid their towels out around midnight ready for the next morning! Unbelievable! Departing Minorca, we had a flight to catch at around six in the morning so we were being picked up from the hotel around three a.m.. I crept around the sunloungers collecting every damned towel. Then I took them to the kids' pool table round the corner of our block and very neatly I piled these towels up one on top of the other in no particular order. There were at least thirty of them. Shame I never got to see the guests' faces when they sauntered smugly to their "reserved" sunloungers later that day or angrily sorted their towels out from the pile.
"Who would do something like this Brian?"
"Probably that Yorkshire nutter in Apartment 32. The one who was always reading!"
The phallus boy almost inspires me to dream up a new and much bigger act of mischief of my own. Something new. Something original. Something that would make folk giggle. Any ideas?
- March 25, 2009