Last Thursday was such a beautiful late summer day - so deliciously warm under a clear blue sky. I decided to have a break from digging, path laying, planting and decorating. Instead I drove out to the nearby North Derbyshire village of Eyam. I parked up, tied on my boots and started walking - no map, no jacket, no knapsack or water. It was the sort of thing I could have never done during my teaching career. Many is the time I used to look out on glorious days and wish I was away tramping country paths, enjoying the sunshine, leaving behind all those words, those voices, those eyes that inhabited those humdrum classrooms.
I saw a footpath edging the village churchyard and followed it up the hill into the woods and the narrow road that leads to Mompesson's Well. Very strangely, halfway up the hill I came across four llamas in an isolated paddock. They looked at me as if to say, "Can you tell us the way to The Andes mate?"
Mompesson's Well is named after a local vicar who was the incumbent of Eyam church in the middle of the seventeenth century. Plague raged in London and through much of northern Europe but it hadn't worked its evil way as far as the northern counties of England - that is until August 1665 when it is said that some flea-infested bundles of cloth were brought to Eyam. Very soon The Plague spread through the village and in sixteen terrible months 260 out of an initial population of 350 were killed. The Reverend Mompesson allegedly urged his parishoners to create a self-imposed quarantine so that the disease wouldn't spread beyond their unfortunate parish. Just outside Eyam is a well which used to be used by packhorses, sheep and their drovers. During the time of The Plague, the story goes that supplies would be left there for the villagers to collect.
I went cross country to investigate an abandoned fluorspar mine and then on to the hillock which is now dominated by a Derbyshire police force radiomast, then down a long rutted limestone lane towards Abney, turning left past the trees where some New Age travellers have made an encampment, then down a very muddy path through old copses towards the stone quarry and a mile or so along the minor road that leads back into Eyam. Two and half hours had passed and I felt hot, thirsty and hungry but nicely invigorated. Time for "The Miners' Arms"!
After buying a "Guardian" at the village store I was soon sitting outside the pub with a pint of orange cordial and soda water waiting for my delicious BLT on fresh ciabatta bread.
Although I had been to Eyam several times before, I had never visited the Riley Graves on the outskirts of the village. After lunch I walked a further half mile eastwards to the strange miniature graveyard that is home to six members of the Hancock family who all succumbed to The Plague in 1666. If you would like to learn more about Eyam - The Plague Village please click on this photograph of The Riley Graves:- 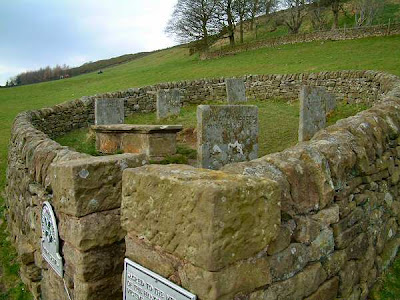