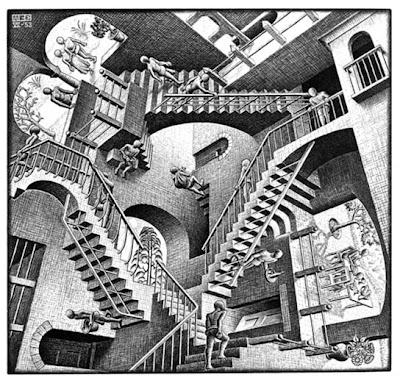 Escher - "Relativity"
I am typing this at our local public library because of an organisation called TalkTalk - an arm of a profit hungry business called Carphone Warehouse. Perhaps naively, I had imagined that switching our home phone and broadband provider from Orange to TalkTalk would be a smooth and simple process. No way! When the moment for switchover occurred on Tuesday evening our phoneline went stone dead.
The next day and today I have made various calls to TalkTalk on Shirley's mobile phone but it's a bit like entering a maze by Escher or an Alice in Wonderland parallel universe in which you are essentially talking to brick walls with Asian accents who claim no knowledge of previous calls and seem to be following very different scripts. Every time you call this corporate monster you have to painstakingly provide various personal details and each time it is like going back to the beginning.
The upshot is we have no dial tone at home just now and no internet access. When this will be fixed I have no idea because TalkTalk don't seem to care. This morning one of the Asian people spoke of a rather vague "five days" which is a damned sight more than the twenty minutes disruption they referred to in the original documentation. As you will guess I am not a happy bunny just now. That sense of annoyance has been compounded by the fact that TalkTalk have been redirecting our home phonecalls to another address in Sheffield - a nice young man who is also having difficulties with the company. TalkTalk claim no knowledge of this redirection error.
Internet access is such a vital part of modern people's lives - not least for email connection, maintaining blogs, banking, research and in Shirley's case working on her masters degree in nursing. Try as I might, I get no proper answers from TalkTalk who will no doubt claim the £30 connection fee in spite of all the hassle and expensive mobile phone calls we have had to make. They have you by the proverbial goolies having previously extracted banking details etc. from naive new customers like me who stupidly think that the idea of honouring promises remains a guiding business principle. Aaaaargh!
- December 03, 2009