How close did you ever get to death before your time? Some people don't dodge it. I'm sure we all have known people, friends, family members, work colleagues who fell by the wayside far too early, dying too young. Equally, most of us can recall moments in our own lives when we thwarted death, survived by the skin of our teeth. Let me share the true tale of one of my near misses.
This escape took place in 1973. I am on my island - Rotuma in the far Pacific. With a bunch of older village children I have clambered over the rocks and round to the volcanic headland's base. It juts out beyond the coral reef. The receding tide has left a massive rock pool, so big that you can swim in it, even dive head-first if you're careful. We laugh and swim and banter away the afternoon. Then it's time to edge back over the rocks and round the headland to the paradisical palm-fringed beach of "Coral Island" or of commercials for "Bounty" coconut bars.
The soles of the kids' feet are like leather but mine are still pink and tender. I'm left behind the others. I have put on my towel sweatshirt and I'm rather tired. There's a big flat rock. It slopes at a forty five degree angle towards a little gully where the Pacific swells in splashing waves. The top of the big flat rock is at least four metres from the gully but as I slip I am not reckoning on the seaweed slime that clings to it. I try to get a grip but it is impossible. I am sliding inevitably into the treacherous gully.
It's like falling into a natural waste disposal unit. For a moment I'm there in the water at the bottom of the gully, then the swell lifts me up and crashes me against those unforgiving rocks. I try to get a hold of the big flat rock I had just plunged from but it remains impossible. I have already swallowed a pint or two of seawater and though I don't realise it at that moment, my head is now bleeding profusely.
Instead of bashing me against the rocks again, the ocean decides to draw me away from that dangerous gully and I am now in the open sea where there are sharks and other deadly creatures. I am five metres from the headland and I think to myself - I will just swim parallel to the rocks and find a safer place to clamber out but the ocean has other ideas. No matter how hard I swim, the current is pulling me further out. The towelling sweatshirt is heavy and I struggle to get it off, under the waves, gulping several more mouthfuls of seawater. I must survive. I must. 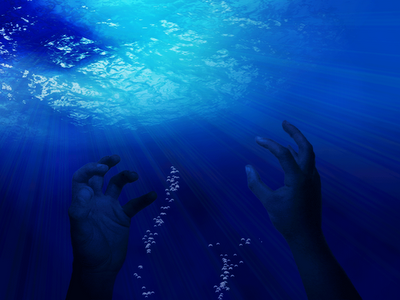 Pathetically, I yell "Help!" for I can see some of the village kids on the beach, sixty metres away, but they can't see or hear me. I am a little cork in a vast and uncaring body of rolling salt-water. It is taking me away, out to my inevitable death by drowning. I am nineteen and frightened. There's so much more I want to do. I don't want to go like this. And it embarrasses me, the militant atheist, to admit this but a cynical thought occurs to me - try begging God, it's worth a go - and so inside my head I say "Please God help me" even though I firmly believe there's no-one listening.
The current that had pushed me twenty metres out to sea now allows me to swim towards the island. Laboriously, I cut in towards the rocks again and find a place where I can more safely escape my would-be executioner. With every remaining ounce of my strength I scramble up. Exhausted, with blood still leaking from the gash on my head, I lie belly down, trembling and intensely grateful on the rocks. The whole event has lasted little more than ten minutes.
A couple of the village boys come looking for me and understand immediately what must have happened. Quietly, they help me home. I am alive. Life's journey isn't over.
- May 13, 2010