The border guard shuffled over from his corrugated sentry box. Evidence of recent meals was spattered on his collarless granddad shirt. From his box, ukulele sounds merged with the unmistakeable and whiningly comedic singing of George Formby. "When I'm Cleanin' Winders..."I wound down the car window and the guard seemed to be speaking to me but it was as if his mouth was filled with marbles. At first, I couldn't understand a word.
"Excuse me."
He tried again and from the morass of curiously rounded syllables emerged a question - "Why are ye visiting Lancashire?"
"We're - going - to - see - a - football - match - at - Wigan," I replied in a deliberate manner with pauses between each word.
He shuffled back to his box, stamped our passports with the red rose of Lancashire and manually lifted the rusting barrier to let us through.
Here we were motoring through "The Dark Side". Some people live in light while others live in darkness and so it is in this unending War of the Roses. Here in Yorkshire we raise statesmen, musicians, inventors, poets and artists but on The Dark Side, sometimes known as Lancashire, there is nothing. Just Lowry-like figures bending into the rain and millgirls clutching their shawls as they clog their way through ink-black puddles.
Racing through Gorton and Audenshaw towards Eccles and Salford, we bravely traversed the sprawling Lancastrian metropolis of Manchester. "Just keep going," I kept saying to myself as we overtook vans carrying pigs' trotters to Ramsbottom and black puddings to Blackrod. Not a moment too soon we reached Junction 5 of the M61 and followed the grimy signs to Wigan via Westhoughton and Hindley.
This was the heart of darkness. Men in flat caps leant against crumbling cotton mill walls while small girls skipped or hopscotched towards lunchtime - when no doubt they'd be tucking into bowls of tripe and onions while watching re-runs of "Coronation Street". There was a sophisticated restaurant called "Summat To Ate" and three pubs - all with the same name - "Last Orders". Pedestrians passed in their clogs and I thought of that song about Lowry - "He Painted Matchstalk Men and Match stalk cats and dogs..." 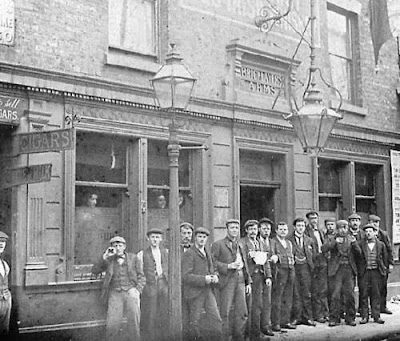 Wigan Athletic supporters before Monday's match with Hull City
Finally we arrived at the DW Stadium - home to Wigan Athletic. It was to be Hull City's last away game in The Premiership following our recent and very sad relegation to the darkness of The Championship. But from the "Road to Wigan Pier" gloom emerged three new bright talents - all home-grown - Mark Cullen, Will Atkinson and Tom Cairney. Cullen and Atkinson even scored on their full debuts as we achieved a creditable 2-2 draw.
The Premiership "ride" has been fantastic. It took my team 104 years to get there and with wiser governance we could have stayed for another couple of seasons at least. We have seen some brilliant games and witnessed some great results amidst more defeats than we'd like the record books to show but I wouldn't have missed it for the world - genuinely a dream come true.
In Hindley, on our way back from The Dark Side, we stopped at a random public house - "The Lord Nelson" and ordered half pints of beer. Several Lankies stared at us - they'd probably never seen or heard real life Yorkshire people before. There were four or five little rooms in that pub but in every one was there was a big 40inch TV screen blasting out deathly rays. No wonder the locals seemed utterly stupefied. We had to get back to Yorkshire... as a matter of some urgency.
- May 04, 2010