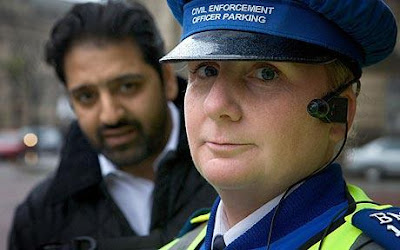 Paddy McGinty - Number ten!
I collected my tenth traffic warden on Friday night down in Birmingham. Our Frances is renting a house on Dawlish Road, Selly Oak. In front of the house are double yellow lines but I parked on them in order to be able to unload our car. It was chock-a-block with possessions for student living including a five foot canvas from "Poundstretcher" with a black and white photograph of Brooklyn Bridge printed on it.
Huffing and puffing after my umpteenth short trip into the house, I noticed someone loitering on the broken pavement. Damn me! A civil enforcement officer in all his military garb. "You can't park here mate!" he announced in a broad Irish accent. Two points to wind me up - calling me "mate" and not even a British citizen. "I'm unloading. My daughter's moving in here and the Highway Code says you can unload when parked on double yellows," I snapped, eyeing him up and down in the manner that a Serengeti lion might peruse an oryx antelope. "Well oim still givin yez a ticket!" grinned the evil paddy. 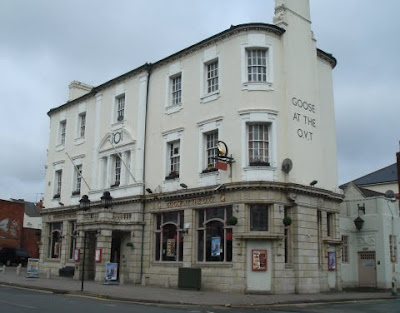 "The Goose" Selly Oak, Birmingham
I looked up and down Dawlish Road. Traffic was crawling by "The Goose" at the bottom on Bristol Road but on Frances's bedrizzled street, nobody was about. "No you're not!" I snarled and the Irishman's face was a picture of surprise as I bundled him into the open hatchback. My trusty old fishing net wasn't there so I had to tie him up with orange electrical extension wire. I pushed a chamois windscreen cloth into his protesting mouth before slamming the hatchback door. I might have accidentally caught his fingers. Number ten!
Back in Sheffield with Paddy safely locked up with the others in the stinky underhouse, I set off this afternoon for "Netto" at Woodseats - mainly to get my moaning captives some cheap grub to eat. Greedy devils they are. Imagine my delight when I spotted two lady parking officers sauntering along Chesterfield Road. I skidded round the corner into Helmton Road and quickly parked up behind a rubbish skip. My heart was beating like a hunter's. Then I was out of the car in a flash raising the hatchback door.
I remembered how in John Fowles's "The Collector", the anti-heroic Frederick Clegg trapped lovely Miranda with a sob story about an injured dog. As the gossiping wardens reached the street corner, I went into melodramatic actor mode, running over to them and in an affected, quivering voice said - "Help me! Help me please! I think I've just killed a dog. He's in the back of my car!" The Nazis rushed to my Astra and bent over in unison. They were unbalanced momentarily but it was enough time for me to push them headfirst into the hatchback and slam the door.
They were kicking and screaming as I drove off so I cranked my car radio to full volume - somewhat like a cruising twenty something in a souped up old Subaru. A few pedestrians looked at me disdainfully as I drove by with "Please Don't Let Me Go" by Olly Murs bursting out of the car's speakers but at least the protestations of Numbers Eleven and Twelve could not be heard above the eardrumming din.
I stopped near the quiet postbox where postman David Hird was murdered a few years back and prised open the hatchback door again. The two pathetic women were in a tangled heap. I threatened them that if they didn't stop kicking and screaming, I'd drive over to Hull and drop them off the Humber Bridge. Admittedly, I coloured my threats with numerous vulgar swear words while squeezing their chins simultaneously and as firmly as I could. "So shut the f*** up!" I growled before slamming the hatchback door so hard it was a bit like a shotgun going off.
Back home, I got the old net before forcing my last two captives through our front door and out through the back then down into the underhouse. I didn't even ask their names and couldn't be bothered to read their identity badges. All you need to know is that they are meter maids, civil enforcement officers, traffic wardens or whatever you might want to call them. And they're down there now with the other ten, wondering what's going to happen to them.
- September 27, 2010