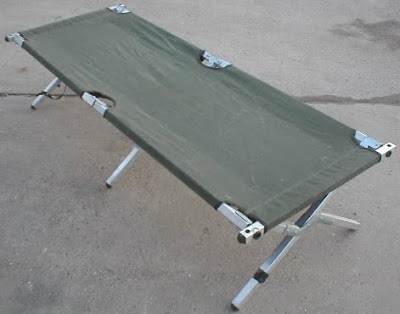 I bought twelve of these American army-style camp-beds.
As a warrior in the PFM (Parking Freedom Movement), I am proud to report that yesterday afternoon I bagged not one but two parking enforcement officers! They are now ensconced comfortably in our "underhouse" which I soundproofed some weeks ago with special acoustic tiles that are normally used in recording studios.
I got the twelve khaki coloured canvas camp beds from the Premier Army Stores in Barnsley. Of course, I wore a disguise. Thick spectacles, a false beard (ginger) and a scoutmaster's uniform. I said I was buying the beds for a scouting jamboree. The woman behind the counter seemed more interested in her copy of "Hello!" magazine. Load of tripe if you ask me.
So there I was on Bristol Road near Hunters Bar. Nobody was about. I took the fishing net from the back of our car and crouched behind a blossoming hydrangea bush at the entrance to someone's garden. As luck would have it, just five minutes later, an unsuspecting parking attendant turned the corner and came goose-stepping up Bristol Road humming "Deutschland Erwache". Cruelly, he wrote out a ticket for a green Fiat Punto and chortled as he affixed it to the windscreen (windshield to Americans).
My blood was boiling. I knew I had a moral duty to strike a blow for the suppressed motorists of this world. I timed it perfectly. Just as he passed the stone gateway, I leapt from behind the bush and chucked my fishing net over the stormtrooper. We tumbled to the ground in a heap and he started to squeal "Help!" but I had anticipated this so I quickly plunged into my jacket pocket, grabbed the fat bramley apple I had been carrying and rammed it right in his moaning mush.
Anxious not to be seen, I manhandled the brute into the boot (American: trunk) of our car and was just about to slam the hatchback door when god-dammit another parking enforcement officer came racing up the street in her unisex military uniform. "What the f... do you think you're doing!" she demanded. You should have seen her face when I simply grabbed her in a bear hug and manouevered her into the boot too. I only had one apple so I had to push a Sheffield AtoZ map book into her complaining mouth.
Adrenalin was coursing through my veins as I drove back up Ecclesall Road towards Pudding Towers. I knew I would have to wait till nightfall to drag the blighters through our house and down to the "underhouse" door. As normal, I made tea for Shirley and Frances. They inquired what I had been up to and I said I had been for an afternoon walk over Stanage Edge.
After they had finally gone to bed, I unlocked the car to see the frightened eyes of the two parking enforcement officers staring back at me. They were trying to speak but of course their mouths were full and whatever they were trying to say came out like meaningless gibberish.
After I had wrestled them with some difficulty into their new "home" under our house, I brought them a flask of coffee and some digestive biscuits I had bought at Lidl on Monday evening. I am not a heartless man. It was a "buy one get one free" deal.
The female attendant, whose name is apparently Katherine, was sobbing as I departed the underhouse, moaning something about her "little boy". Of course I had retrieved my AtoZ by this time, complete with bitemarks! The male stormtrooper is number 3215. You can see this on his epaulettes. He wouldn't tell me his name but Katherine let the cat out of the bag when he foolishly tried to push me over as I was opening the biscuits. "Stay calm Robert!" she screeched hysterically as I whacked him with my leather gardening gloves.
So there we have it. Two of them are off the streets and ten more to go. Wonder if I'll become a national celebrity carried shoulder high by the people? Just like the liberation of Paris.
- September 03, 2010