"The Star" is the name of Sheffield's evening newspaper. It is delivered to our house every day by a pleasant ruddy-cheeked lad on a bicycle. As far as local newspapers go, I think it is very good. It strikes a nice balance between reporting current news and providing general local information. There are sudoku puzzles, a daily crossword, which I frequently complete, and classified ads.
Imagine my consternation this evening when this front headline glared back at me "Parking Officers Missing!" Alongside the story, which was continued on page three, were mugshots of my first four catches - Robert, Katherine, Mohan and Daphne. My heart skipped a beat I can tell you. I must admit that I just assumed nobody would be even slightly bothered about the disappearance of a few measly parking enforcement officers. Who would care?
The newspaper report included quotations from a police spokeswoman. She said: "All four attendants have disappeared this week while on duty in the Hunters Bar area" and "A reward of £100 has been put up by the Parking Officers Union for information on the whereabouts of the missing officers."
In spite of this publicity, I am determined to continue with my righteous campaign. I will just need to be a bit more careful. Avoid Hunters Bar area from now on and perhaps lay off the "fishing" trips for a few days.
Now if you'll excuse me I shall have to attend to my cellar dwellers. I gave them a big plastic bucket for toilet use but it stinks something awful. I nearly gagged when I went down there this morning. That's why I have bought a large canister of "Haze" Alpine Meadow air freshener. I'm also taking down some post "sell by date" bread and sausage rolls that I bought from the local Co-op just before closing time. Daphne has requested some reading material so I'm giving her two of Shirley's old Jodie Picoult novels. I think one is called "My Sister's Keeper". Not my cup of tea I can tell you.
Apart from the stink, they seem very comfy down there. Good job it's not wintertime. Even so, I have generously given each of them an old blanket from our attic and there are some hessian sacks that Shirley's dad used to store vegetables in. He grew the finest leeks I have ever seen.
This morning Katherine was whining like a schoolgirl. "Why?" she kept repeating till I snapped - "Why? Because you're a parking enforcement officer! Isn't it obvious? I'm leading the fightback! Now shut your gob or I'll shut it for you!" She went quiet then and curled up on her camp-bed in what I think is known as the foetal position. I watched her sobbing pathetically, before burying her face in Robert's shoulder when he sat on her camp-bed and tried to comfort her.
Mohan Lal was lying noiseless on his bed, just staring at the ceiling with his hands interlocked on his belly. I had the idea he might have been planning something. It made me feel that I'll need to watch him or put Plan B into operation.
So I am going down to the underhouse again, happy in the knowledge that dozens less parking tickets will have been slammed on car windscreens this week. No one forced my captives to become parking enforcement officers so they can hardly complain. We motorists have had to cough up our hard-earned dough now they will have to pay too! 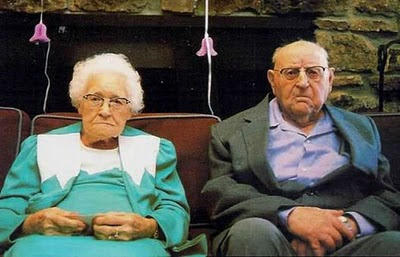 Katherine and Robert - not too pleased about their incarceration
- September 05, 2010