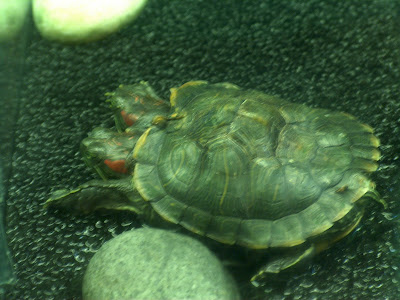 As it says in Wikipedia, "The red-eared slider (Trachemys scripta elegans) is a semiaquatic turtle belonging to the family Emydidae. It is a subspecies of the pond slider. It is the most popular pet turtle in the United States and also popular in the rest of the world. It is native only to the southern United States, but has become established in other places because of pet releases."
What Wikipedia doesn't mention is that very, very occasionally this animal species will produce two-headed offspring. Both heads can often function and feed and these freak creatures can sometimes live to maturity.
After zooming up the modernistic Kula Lumpur Tower last weekend, I descended to the tower's base and there in the shadow of that four hundred metre high telecommunications structure, I entered Animal Kingdom where, much to my amazement, I spotted a two-headed red ear slider turtle. I never knew such creatures existed. I am sorry my photo is a bit blurry. It was taken through smeared glass. Here's another by someone else:- 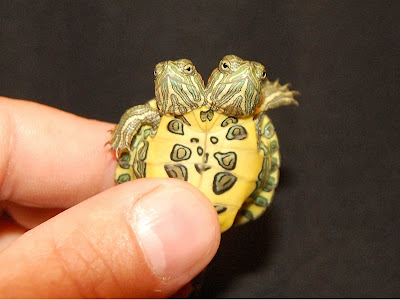