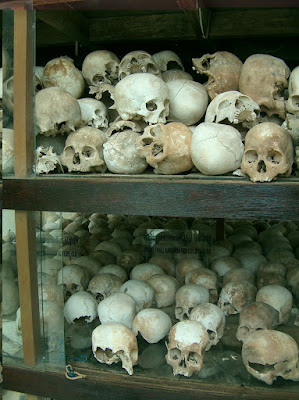 At Choeung Ek, The Killing Fields
...Now I am back home. I arrived at Manchester Airport at midday on Sunday. There was Shirley with Frances and Ian waiting for me as I emerged from the ante-room of "Nothing to Declare". So delightful to see them in the flesh again - my dearest loved ones - and we travelled back to Sheffield over the Pennines via The Snake Pass, calling in at The Snake Pass Inn for sandwiches and drinks.
How lovely England is in the summertime. The rolling moors of The Peak District, deciduous trees in full leaf, sheep grazing in fields walled by rough limestone, echoes of history everywhere and my beloved Yorkshire, the true heart of civilisation. As we drove into our city the local streets were thronged with flag-waving schoolchildren and older Sheffielders, pleased to see their most esteemed resident returning from his missionary work in the far East. Home.
So why is the title of this post "Darkness"? Well, I'm still thinking of Cambodia. Specifically I am thinking about the estimated two million who died under the rule of the Khmer Rouge between 1975 and 1979. Who died? City dwellers, teachers, educated people, former police officers or members of previous military forces, people who wore glasses, people who were too ill to get out to work in the rice fields, people who ran away, babies, people who collapsed on long treks or got stuck in the mud, people who did not bow their heads or looked "funny" at their Khmer Rouge guards. It was a dark and evil madness.
I realised that the judicial system that operated after the Khmer Rouge were ousted by Cambodia's Vietnamesse liberators was weak and narrow in its outlook. So many of the cruel foot soldiers must have been absorbed back into regular Cambodian society. Now in their fifties or sixties, they will be husbands and fathers, grandfathers, tuk tuk drivers and rice farmers, mechanics and builders, guarding memories of their madness, their black pyjama uniforms, the corrupted Communist dream and the sound of wooden hoes breaking skulls.
Their evil leader - Pol Pot died in luxurious exile as late as 1998, never having faced the official justice he so richly deserved. Though Cambodia is trying to move on, the legacy of the past fills the air like the foul odour from the sewage farm I noted as my tuk tuk driver - "Peter" took me to the Choeung Ek Genocidal Centre (The Killing Fields) on the outskirts of Phnom Penh.
Earlier he had taken me to the eerie Tuol Slong High School, once a torture centre for the Khmer Rouge. I found myself whistling the same lament I had whistled under my breath at Sachsenhausen near Berlin. Why and how? And where will this darkness surface again in another part of the world? Perhaps it's already reappearing in Afghanistan and Libya, Syria and Yemen. Perhaps it never went away. At Tuol Sleng, I saw classrooms meant for enlightenment, discovery and learning turned to prisons and torture chambers and displays of the dead, like this frightened little girl:- 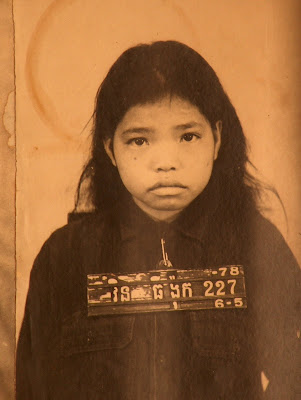 And this nameless baby-faced little boy:- 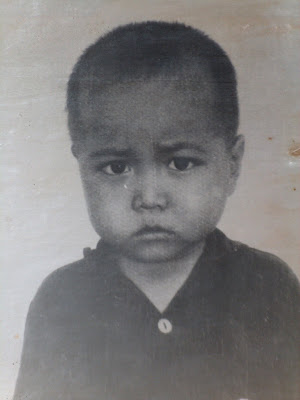 Never to wait at the airport gate for their fathers. Never to see another summer. Innocent victims of the darkness in men's hearts. Needless to say, these children did nothing wrong. But who shall remember them and ensure that their deaths were not entirely pointless?
- July 11, 2011