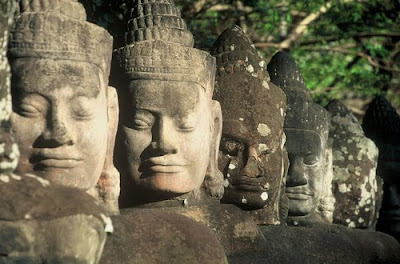 "Awesome" isn't a word that normally figures in my vocabulary. It's similar to other "trendy" terms that young people have historically adopted to express approval - from "fabulous"to "wicked" or "cool". However, I think that "awesome" is probably the best word I could pick to describe the building complexes that make up the historical park known as Angkor Wat in Cambodia. Quite astonishing.
I think of all the man hours involved in hewing all that stone and then transporting it along jungle tracks. Then the brilliantly well-organised assembling of huge buildings, then the intricate stone carving - miles and miles of it - all expertly done. Thousands and thousands of man hours spread across five centuries before Angkor Wat was regurgitated by the jungle and almost forgotten. And I think - why? Why do this? What was it all about? Clearly it was driven by all-consuming religious commitment married with the characteristic egotism of any civilisation's most powerful leaders.
For two days, I have ridden in the back of trusty Savuth's tuk-tuk, visiting over twenty ancient sites. I have seen so much and yet I almost think that I just scratched the surface as I picked my way over broken stones or dipped my head as I moved along endless corridors or scaled mighty temples shaped like some mythical Hindu mountain. Awesome indeed. I have already taken over three hundred photographs.
I'm writing this in the lobby of the lovely Angkor Spirit Palace Hotel on the southern edge of Siem Reap town - just twenty US dollars a night for a double room with breakfast. Such friendly, helpful staff and the other guests are okay too. After lounging in and by the pool for an hour, it's now raining cats and dogs but like yesterday. I expect that today's tropical downpour will be over almost as quickly as it began.
- July 03, 2011