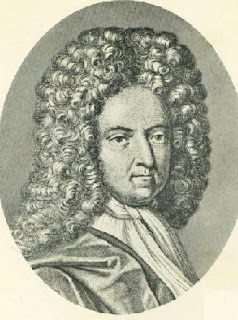 Who is this handsome fellow with the audacious hairstyle? Why, it's none other than Daniel Defoe (1660-1731), author of  the grround-breaking "Robinson Crusoe", "Moll Flanders" and "A Journal of The Plague Year" which is presumably a horror story set in Canton, Georgia.

The hero of "Robinson Crusoe" is also the novel's narrator and he was Yorkshire born and bred. If he hadn't been he would surely not have survived the shipwreck and the lonely years he spent on his famous desert island. It is possible that Defoe modelled his hero on seventeenth century sailor Alexander Selkirk who lived alone on an eastern Pacific island for four years before being rescued.

This is the first paragraph of "Robinson Crusoe". Notice that Robinson refers to both Hull and York - the cradles of English civilisation:-
I was born in the year 1632, in the city of York, of a good family, though not of that country, my father being a foreigner of Bremen, who settled first at Hull. He got a good estate by merchandise, and leaving off his trade, lived afterwards at York, from whence he had married my mother, whose relations were named Robinson, a very good family in that country, and from whom I was called Robinson Kreutznaer; but, by the usual corruption of words in England, we are now called - nay we call ourselves and write our name - Crusoe; and so my companions always called me.


By Chapter Five, he has arrived at his famous island which he calls his "Island of Despair". This is a feeling with which I can identify for here in Blogland, though I am surrounded by chuntering Burmese servants, the sense of isolation and abandonment has grown upon me like a cancer:-

September 30, 1659. - I, poor miserable Robinson Crusoe, being shipwrecked during a dreadful storm in the offing, came on shore on this dismal, unfortunate island, which I called "The Island of Despair"; all the rest of the ship's company being drowned, and myself almost dead.

Yes, when I see a picture of Robinson Crusoe, it is, metaphorically speaking, like staring into a mirror:- 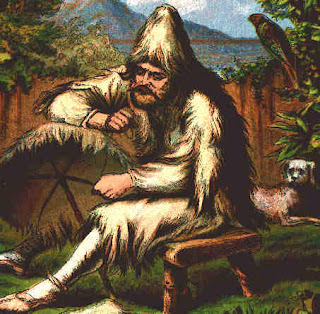 Oh, and here I am disciplining my pretend Shooting Parrots - "Who's a pretty boy?":- 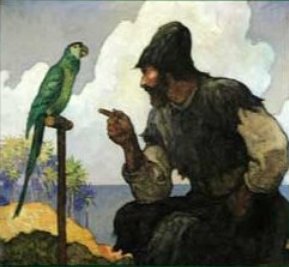