Words will often make us laugh. We chuckle at small children's misuses just as we giggle at the verbal faux pas of the elderly. Puns and malapropisms are the stock in trade of your average comedian. Words can be used like weapons but they can also be great fun. You might chortle at some of the following statements but I am afraid I can't claim to have spawned them. They were passed on to me in an e-mail round robin. Apologies if you have already received it.... 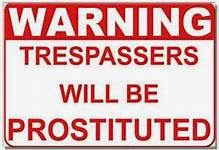