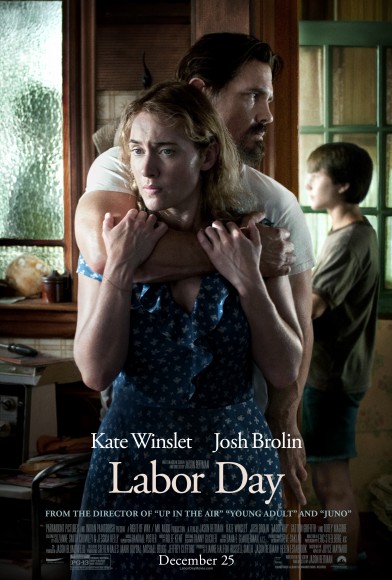 Let us forgive our American cousins for mis-spelling the title of the film I watched on Thursday morning. "Labor (sic) Day" was directed by Jason Reitman and based on the novel of the same name by Joyce Maynard. As you can see from the adjacent poster, the stars of this film were Kate Winslet and Josh Brolin with an important supporting role played by fifteen year old Gattlin Griffith.

I am pleased that I didn't bother to read any reviews beforehand because they might have prejudiced my enjoyment of the film. As the title suggests, it is based around events that occurred one Labor Day weekend - in a New England community. Adele Wheeler (Kate Winslet) is a depressive divorcee who lives alone in a tumbledown house with her sensitive and supportive son Henry. Money is tight and supermarket visits are frugal excursions. It is on their pre-Labor Day visit that Frank Chambers (Josh Brolin) appears from behind the superhero comics to confront Adele's son. Prison convict Frank is on the run having escaped from custody at the local hospital where he had had his appendix removed.

He needs somewhere to lie low for a day or two and Adele's house is the random hideaway he has chosen. But Frank is not a brutal kidnapper. He fixes things around the house, plays baseball with Henry and memorably shows his hosts how to make a wholesome peach pie with a bucket full of ripe peaches brought round by a neighbour. Adele is awakened from her trough of depression and falls in love with Frank.

They plan to flee to Canada with Henry but events conspire against them and before they can leave the cops have arrived and Frank is taken back into custody. He was imprisoned for the alleged murder of his wife but flashbacks throughout "Labor Day" suggest that he was not guilty.

My attention was held throughout the film. The atmosphere of it was languid - in small town America at the end of a hot summer. Winslet is a very accomplished actress with a wide range of roles behind her and her portrayal of a lost and disenchanted housewife clinging to the lifebelt of love offered by by her uninvited guest was both sensitive and convincing. And I don't care what dismissive reviewers might have had to say about "Labor Day" for I thought this romantic thriller was, as folk from Barnsley might say, "reeght good" or as folk from Surrey might say, "a spiffing film"!
- April 11, 2014