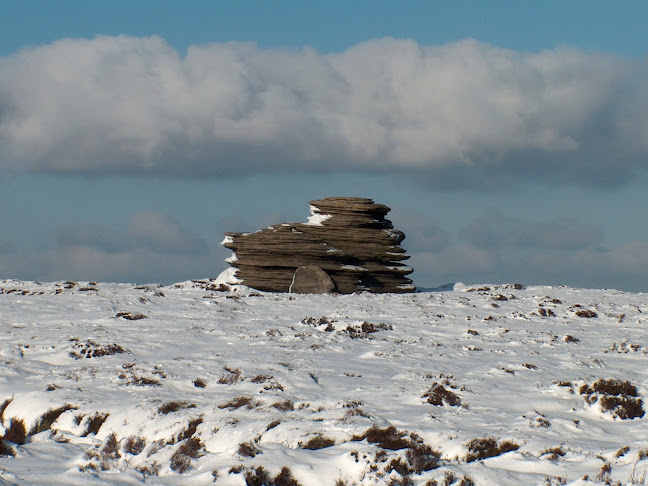 Ten years ago I walked up onto the moors north of Howden Reservoir. There was not another soul around. Snow had fallen, snow on snow - and the air was sharp like broken glass. Up I climbed over hollows and clumps of heather concealed by the powdery whiteness.

I was heading for a stone outcrop that I had previously spotted from afar and had identified via Ordnance Survey mapping. It was and is called The Horse Stone.

It sits in splendid isolation with no other outcrops in its vicinity. I guess that at some time in the distant past somebody must have thought that it had the shape of a horse but I can't see it myself.

I moved carefully through the snow - sometimes sinking up to my thighs - and finally reached the outcrop that could easily have passed for an abstract sculpture. I wondered about our ancestors - people who inhabited those uplands. many centuries ago. Archaeologists have certainly identified signs of pre-Christian  habitation and burial within a mile of The Horse Stone.

What would they have made of such outcrops? I can't help thinking that such places would have been venerated - places to meet and pay homage to natural forces. The people who lived in faraway times would have had no notion of the geological processes that created such strange, unearthly shapes. If only that stone could speak.

This was the blogpost I published at the time. 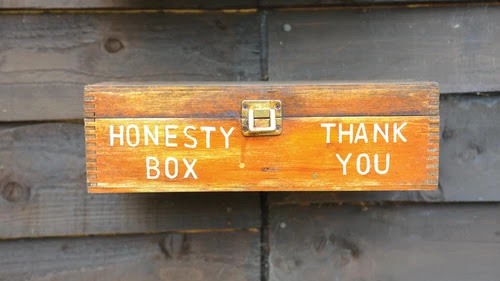 As usual on a Tuesday might, I saddled up Clint and headed for our nearest "Lidl" store on Chesterfield Road. It wasn't a big shopping expedition.

Annoyingly, none of the serviced checkout counters were operational so I had to put my purchases through one of of those irritating self-service checkouts. When it was all done and I had paid my bill with a contactless Visa card, I noticed that I had forgotten to put a single courgette (American: zucchini) through the till. It was still in my trolley.

I admit that for a moment, I was very tempted to sling that thing into one of my shopping bags and just walk out of the discount supermarket. But I didn't because I knew that if I had done that, the act of dishonesty would have preyed on me. Consequently I put the single courgette through the self checkout process and paid a further forty seven pence. It felt better to have done that.

That's the kind of bloke I am these days. I try my best to live honestly - no cheating and no lies. It feels better that way. I can sleep easily in my bed with a clear conscience.

In contrast, our country's prime minister seems to be full of lies. He lied about the benefits that leaving The European Union would bring to Great Britain and he lied about the drinks parties that happened in the very seat of government during the worst times of the pandemic when this country was in shutdown mode.

My mother would frequently retort, "I can't bear liars!". She would have been disgusted with this country's current political leader. Lying is as much a part of his character  as his inability to say "sorry" and really mean it. For him, every pretentious "sorry" is qualified.

If he had an ounce of dignity he would have already resigned and gone off into the wilderness to write his bestselling memoirs. Hopefully, it won't be long before he is squeezed out like the last globule from a toothpaste tube. He's customarily lazy and self-obsessed and doesn't have the wherewithal to MBGA (Make Britain Great Again).

Rant over. Ahhhh... that feels better. 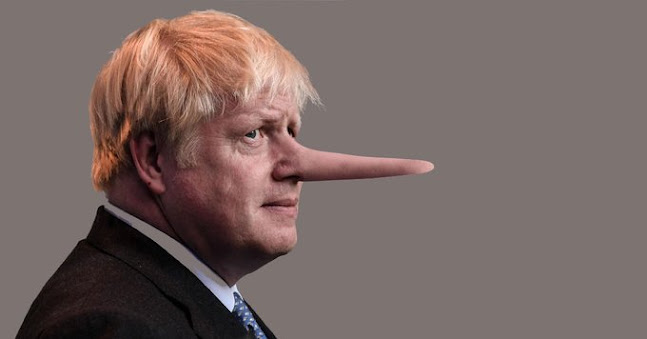 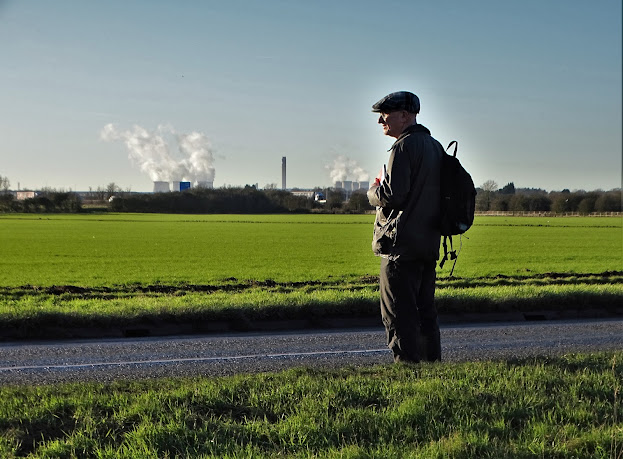 My good friend Tony is recovering from COVID. It laid him low so thank heavens he had been fully vaccinated. Now testing "negative" he felt well enough today to undertake a recuperative eight mile walk. We met in Howden this morning near Howden Minster with the ruins of a much older church in front of it... 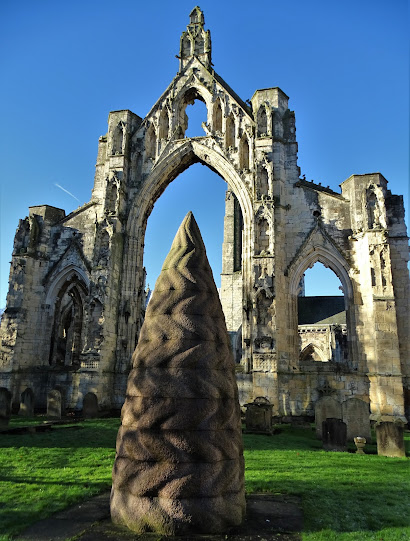 Once again I was in flat country where rivers and an intricate man-made drainage system funnel water eastward into The Humber Estuary and from there into The North Sea.
This picture was taken from Howdendyke by The River Ouse. In the distance you can see the arc of The Ouse Bridge which carries The M62 motorway into East Yorkshire. It opened in 1976. 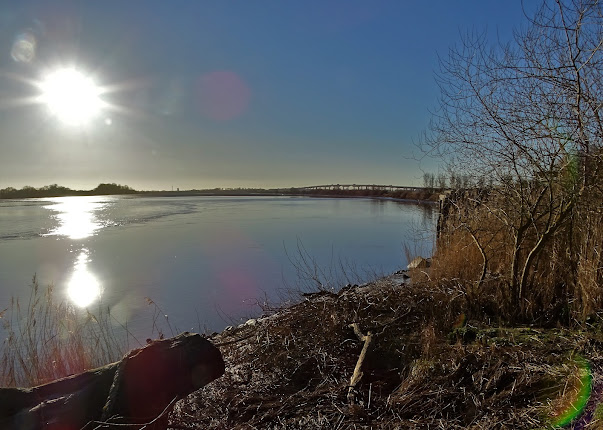 Before the motorway opened, moving south out of East Yorkshire was a tiresome affair. Vehicles had to use the swing bridge shown below. It is called Boothferry Bridge and it opened in 1929. I well remember queues there and how leaving that bridge often felt as if you had just left an island. 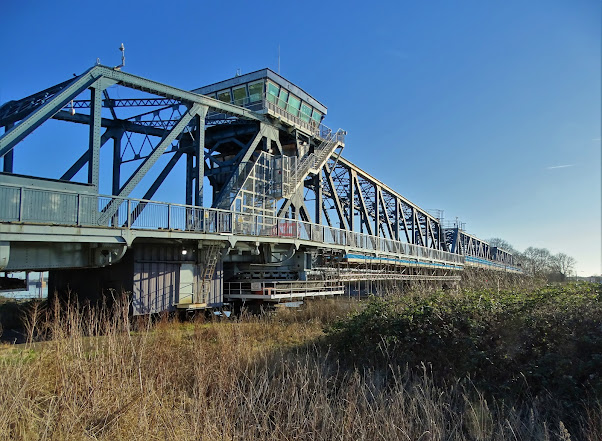 Below you can see the underbelly of the M62 bridge - taken as we walked along the river bank. 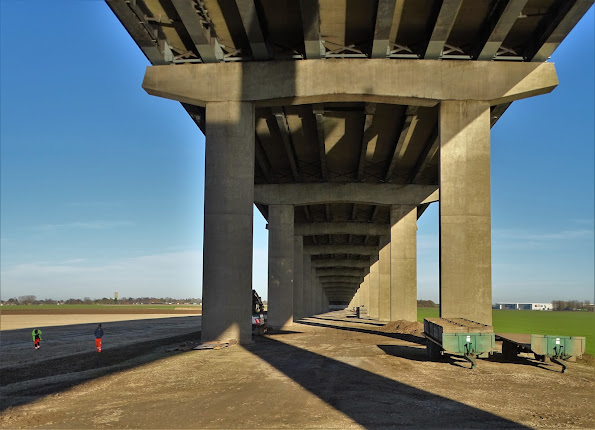 It was a pleasure to walk with Tony again. We plod along at the same pace and though we could converse for ever, we also enjoy periods of silence together. He had brought sandwiches which we ate while sitting on a bench in the village of Asselby.
That was a village my parents knew well because a short time after World War II, my father became the headteacher at nearby Barmby on the Marsh and as Asselby didn't have its own school, its children went to Barmby. My parents lived in the school house next door where they began to raise two little boys. I arrived in the next school house a year after they left there.
Tony and I  got back to Howden Minster at 3pm and sat in a cafe for half an hour, sharing a pot of tea. I think that circular walk in the January sunshine will have been just the tonic he needed. 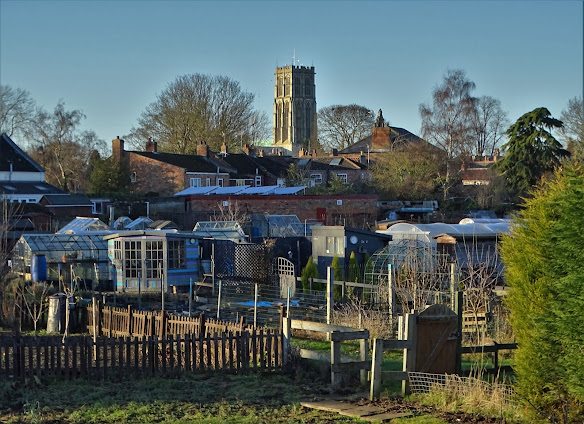 Nobody heard him, the dead man,
But still he lay moaning:
I was much further out than you thought
And not waving but drowning.
Poor chap, he always loved larking
And now he’s dead
It must have been too cold for him his heart gave way,
They said.

Oh, no no no, it was too cold always
(Still the dead one lay moaning)
I was much too far out all my life
And not waving but drowning.
by Stevie Smith
- January 17, 2022 20 comments: 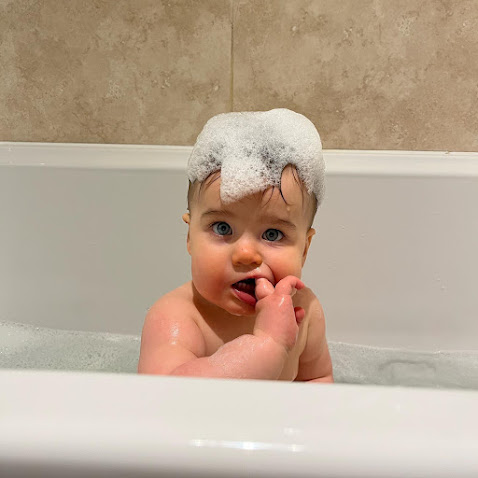 Our lovely granddaughter Phoebe Harriet was one year old today. How those twelve months have flown. All the photographs in this blogpost were snapped by Phoebe's mama. 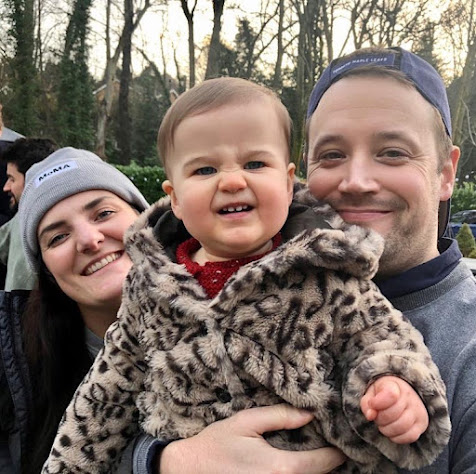 To celebrate  her special day she went to the Yorkshire Wildlife Park but here she is round about 5pm with the birthday cake that her grandma made in front of her. 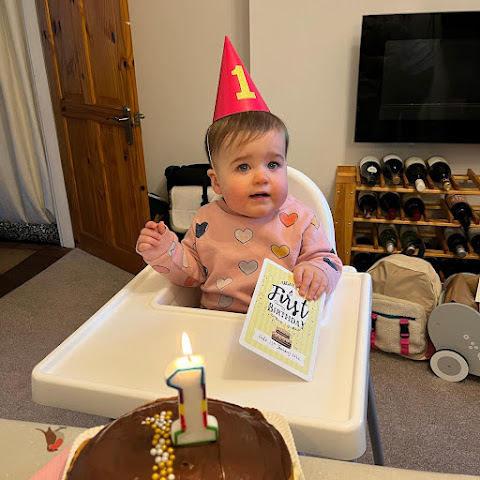 The picture below was taken just after Christmas with four generations in view. Phoebe with her father, grandmother and great grandfather. 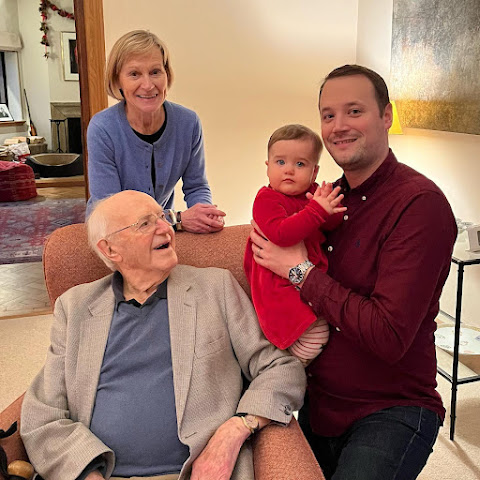 And finally, here's a typical view of our birthday girl. She is generally placid and easy-going though at the moment she has two more teeth coming through so she has been a little grumpy the last couple of days.
Over the past year, Phoebe has been the most wonderful distraction from the misery of COVID. Each day she brings sunshine and joy into our lives and to watch her developing has been a true privilege. 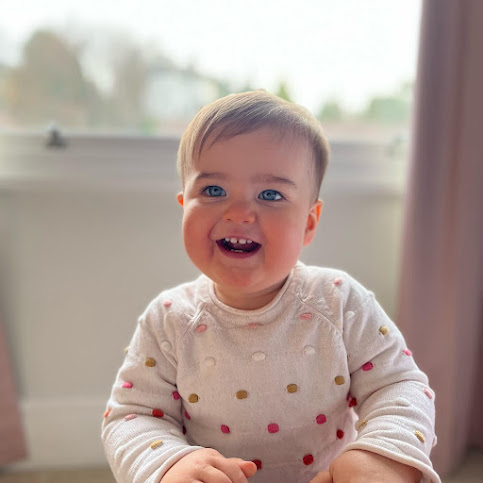 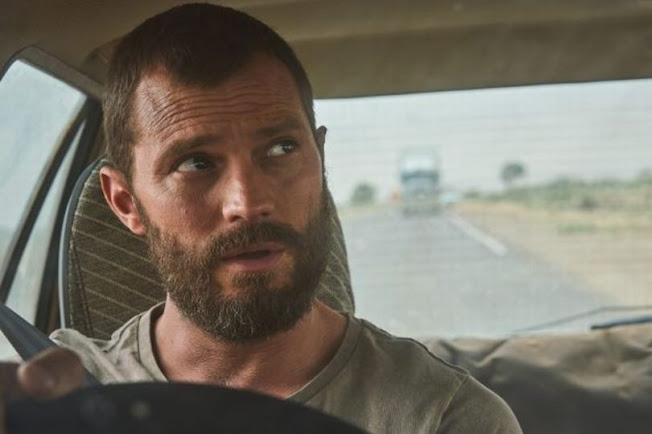 Jamie Dornan as Elliot Stanley in "The Tourist"

I should have written about "The Tourist" before.  After all, I finished watching it ten days ago. Using the BBC i-player, I got ahead of the television schedule and watched the six one hour episodes in six days. That still seems like cheating to me.

Written by Harry and Jack Williams and directed by Chris Sweeney, "The Tourist" is set in a dusty part of rural Australia. The central character - known at first as "The Man" - has been in a dramatic road accident which has robbed him of his memory. He has no idea who he is or why he is even in Australia.

There are a handful of killings in the show and as I have indicated before, I am not a fan of killings - they often seem gratuitous but in this instance I was prepared to let them pass for the greater dramatic good.

"The Tourist" is craftily put together with quirky humour and many eye-catching details. It travels backward and forward in time and is visually appealing with intrigue round every corner.

The performance of Danielle Macdonald as probationary police officer Helen Chambers was as charming as it was comforting. Her positive spirit and naivete stood in contrast to the ruthlessness of characters played by Ólafur Darri Ólafsson, Alex Dimitriades and Damon Herriman.

I do not wish to give too much away so I will just finish here by saying that I found "The Tourist" to be really entertaining and it held my attention throughout. You never quite knew what to expect and I loved the dusty Australian settings that helped to give the drama substance and believability. Maybe you would like it too. 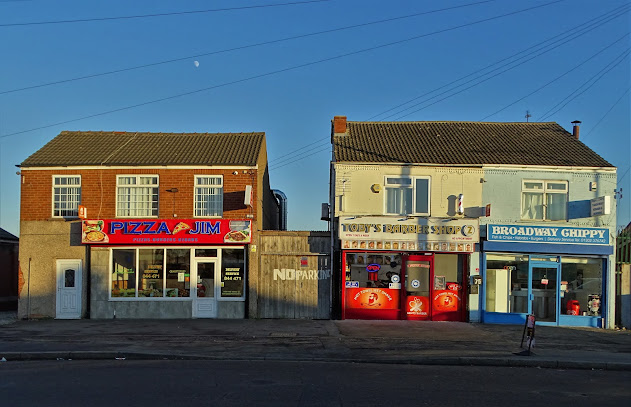 Today, unbroken sunshine was promised from dawn to dusk. It was time for another country walk. I chose the flatlands north of Doncaster and parked Clint near Hatfield and Staniforth  railway station. Above, a pizza business, a barber's and a fish and chip shop on Broadway in Dunscroft.

Below, Lock House Farm north of Barnby Dun. You can see the farm through the trees. 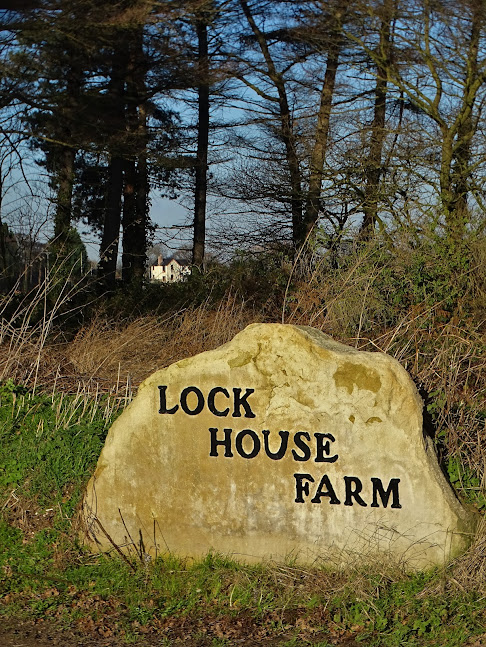 Below is the track to Botany Bay. In the late eighteenth century and throughout the nineteenth century a fashion arose in rural England for naming properties after exotic far away places. It was not a widespread habit but nonetheless it remains noticeable. I have walked by farms called California, New York, Gibraltar, North America and Crimea and I am sure that if I turned my mind to it I could identify many more such lonesome properties with names that similarly look beyond the reality of the here and now... 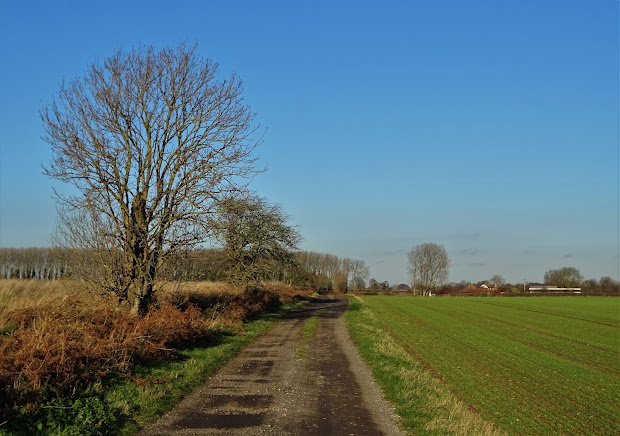 Now I have arrived at Kirk Bramwith. Its lovely little limestone church with its unmistakable Norman door was certainly operational during The Black Death. In these flatlands there is no stone. You see hedges rather than stone walls for field boundaries but somehow the people of long ago managed to transport tons of magnesian limestone to this remote village. It beggars belief. 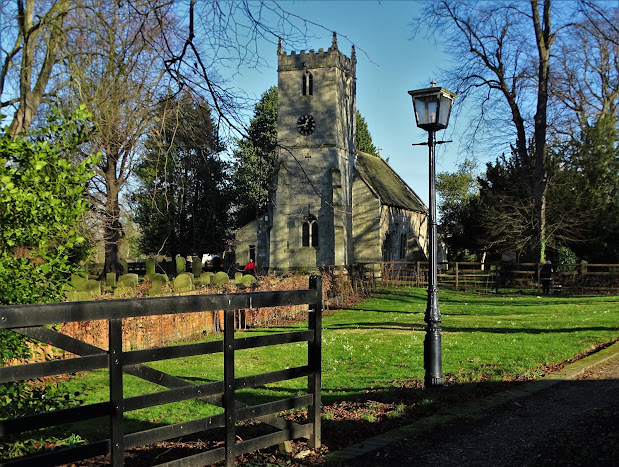 As I was walking to Barnby Dun's even more impressive church - dedicated to St Peter and St Paul, I turned to observe the stubbled field I was crossing and was immediately wowed by the sun's dramatic  illumination... 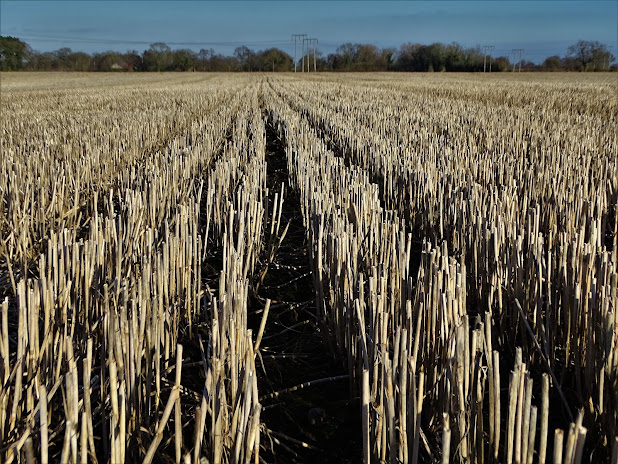 I got back to Clint at three thirty having walked pretty solidly for four hours - covering eight or nine miles.
"Did you enjoy that then?" he asked with a hint of sarcasm as I tossed my boots into his boot (American: trunk).
"Yes I jolly well did!" I retorted, sounding rather like David Niven at a cocktail party in The Hollywood Hills.
- January 13, 2022 30 comments: