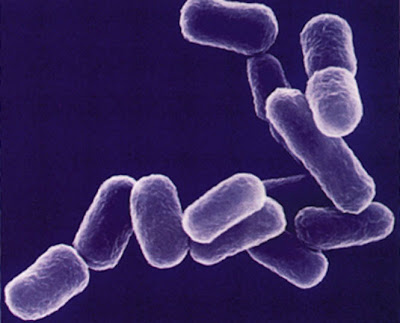 I was lying on the couch in my dressing gown. I wanted a drink of water. The glass was on the coffee table in front of me. Half an hour later, I finally discovered enough inner drive to reach out and grasp that tumbler. Thank heavens for the recent Olympics. After the holiday in Turkey, I seem to have spent every day sprawled on that sofa, feeling like shit as Chris Hoy, Rebecca Adlington, Usain Bolt and Michael Phelps won their medals. The only medal I would have won would have been in couch potatoing!


At first I believed I could do what I always do with health issues - just battle through but after noticing the cloudiness of my urine, I went to my doctor for the first time in ten years. He prescribed a routine antibiotic that traditionally combats most infections of the urinary tract. Over ten days, I completed the course but without noticeable benefit to my health so yesterday I went into hospital to receive, intravenously, my first dose of a third generation antibiotic designed to combat new and resistant strains of "ecoli" such as "ESBL". In half an hour, I will be going for my second dose but as the nurse promised, I am already feeling miles better less than twenty four hours after the first dose.


So what is this damned Ecoli (ESBL) and how did I get it? I found this in "Times Online" from a year ago...


"A new superbug that scientists believe is brought into Britain through the food chain is infecting about 30,000 people a year, according to government experts.

Research has found that between 10% and 14% of those who are infected with the drug-resistant form of E-coli die within 30 days of catching the bug, which would suggest 3,000-4,200 deaths. This would be double the number of deaths from MRSA.

Unlike traditional forms of E-coli, the drug-resistant strain Extended-Spectrum Beta-Lacta-mase (ESBL) affects healthy young adults as well as the elderly. Doctors say the Health Protection Agency (HPA), the government body responsible for protecting the public from infections, has failed to recognise the scale of the problem and needs to do more to control the spread of the bacteria."


Fingers crossed, I am now emerging from ESBL's dark pit of despond and this blog has not met a premature and unplanned end even though, to my horror, it seems that ESBL has been directly responsible for many deaths over the last two or three years. Before this, the particular ecoli strain that attacked me had never been seen. I'm so much looking forward to going out for walks, doing some real physical work, escaping from the TV, living with zest again.
- August 27, 2008 13 comments:

Sheffield's crime of the decade - courtesy of energy giant "Eon".

The Tinsley Towers have stood for seventy one years on the edge of Sheffield. They watched the construction of the M1 motorway and the Meadowhall Retail Centre. Big and concrete, for many motorway travellers, they have signified where the real "Up North" of England begins. The power station of which they were a key feature has long been redundant and now the new owners - the power company "E-on" - have decided that they will be demolished this weekend in the very early hours of Sunday morning. Of course, nothing lasts forever but these sentinels, silent witnesses to a changing world had probably earned the right to remain with us a good while longer. Their functional, industrial ugliness has, with familiarity, become a kind of beauty. There has been a strong public lobby to preserve Sheffield's own "twin towers" but in the corridors of power, nobody has been listening. In memoriam, I took one or two snaps this morning... 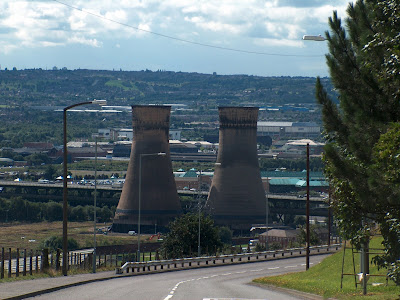 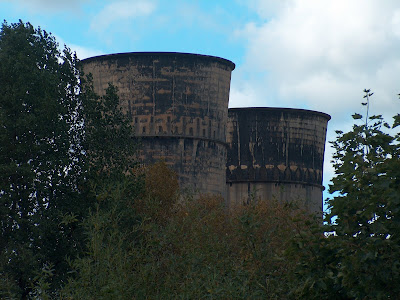 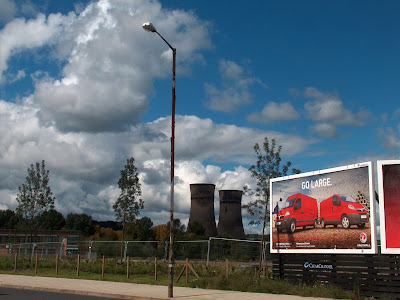 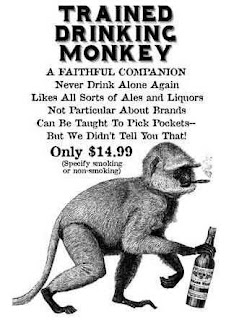 How colourful is the English language. Here is just a sample of terms one might use for drunkenness:-

They say that Eskimos had dozens of different terms for types of snow and that South Pacific islanders had many different terms they could apply to the various parts and multivarious uses of the coconut palm but in the modern English speaking world, we get inventive about drunkenness. And this is surely a highly over-rated state to be in. It causes fights, car accidents, family break-ups, liver damage, obesity, financial stress, sleepless nights, bravado, unwise sexual liaisons, days off work.
Don't get me wrong, I love a drink but these days always in moderation. Drink in pubs lubricates conversation, creates laughter, relieves work-related stress, releases some relationship pressures, gives lonesome people somewhere to be that isn't home. Drink isn't all bad. Do you know any other words for the state of drunkenness?
- August 22, 2008 11 comments:

Of course I was there last Saturday. Where? The Kingston Communications Stadium in Hull to see my beloved Tigers begin their first ever season in the English Premiership. Favourites to go straight back down, we nevertheless mastered Fulham with greater passion and two wonderful goals. Thank you Geovanni and thank you Caleb Folan. "We are Ull! We are Ull! We are Ull!" 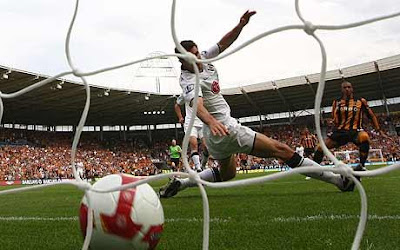 Caleb Folan slides in the winner against Fulham.

On Monday evening, at The Prince of Wales quiz, Jill wondered why and how people like me and her husband Mike could be so passionate about football. He supports Oldham. The term "escapism" was suggested. But I don't know. It doesn't feel like escapism to me - it's just something that is in my blood. To see the Tigers score. It felt just the same when they were at the bottom of the old Division Four with only four thousand people spectating. You leap from your seat. For a moment, nothing else in the world matters. Perhaps it is the opposite of escapism - more likely a primitive urge to belong to the tribe - to identify - to nail your colours to the mast - to avoid escape!
Beating Fulham was a beautiful beginning to our time in the Premiership and hey, looking at how we measure up financially against the other clubs - it is no surprise to me that we are favourites to go back down. That's logic. But passion and the pent up frustrations of a hundred years without success is a factor that bookies may not be able to take into account. And the city of Hull itself is crying out for positive vibes while our Tigers create a buzz of pride and expecation around the city. Every dog has its day.
- August 20, 2008 5 comments:

TURKEY (2)
Is it Kayakoy... or perhaps Levissi... Karmylessos...Eskisehir? It is a "ghost town", abandoned in 1923 during a population exchange that was included in the final arrangements for ending the Greco-Turkish War. For hundreds of years there had been intermingling between Tur

ks and Greeks in terms of territory, trade and friendship. You had Turkish communities in Greece and Greek communities in Turkey. Kayakoy was one such community. Its remains lie three miles north of Olu Deniz - over the mountain ridge.
A couple of years ago I read the heart-rending "Birds Without Wings" by Louis de Bernieres. It tells the story of a Greek villageon mainland Turkey before, during and after the Greco-Turkish war. It seems that the novel's fictional village of Eskisehir was partly modelled upon Kayakoy.

I didn't know what to expect when Shirley and I took the dolmus (mini-bus) from Hisaronu, through the pines to the secret Kaya valley. We got off below the old village, paid five lira each to enter the place and wandered freely. Nearly all the roofs have gone. It's as if the place was struck by an earthquake. 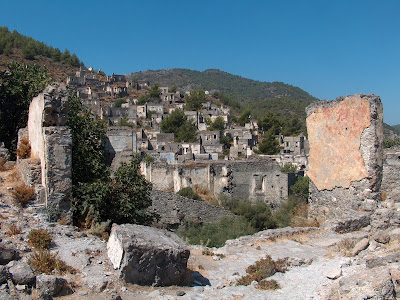 As you wander around, it is sometimes difficult to make out where the main village pathways ran and which is a yard and which is a room. Although the site was only abandoned eighty five years ago, it feels as if this happened much earlier.

It is such a sad, sad place which gives testimony to the customarily awful effects of inter-religious bigotry. As you wander around the stones and walls of what was once a happy, thriving community of some thousand households, you can almost hear the singing, the children being called to bed, old men chewing the fat under fig tree shade, young men returning from the marketplace in Fethiye, women comparing fish in baskets - the buzz of a long established Greek community - knitted together and strong - their houses - arranged like an ampitheatre - looking northwards over the Kaya valley - mainly tilled by Turkish farmers with whom - by all accounts - the Greeks lived very harmoniously. 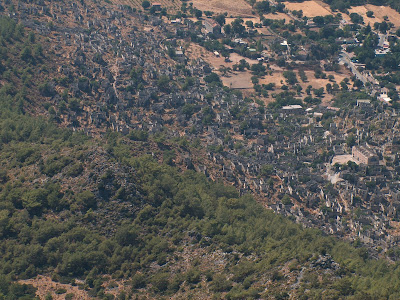 Kayakoy seen from above on my paragliding flight.

If you want to read more details about this weird and moving place try http://www.kayakoy.net/ . Chooses the "English" option and then click Kayakoy in the leftside menu.

TURKEY (1)
...So there I was near the summit of Babbadog, the father mountain. I had my harness on, fashionably tattered flying suit and kingsize helmet for the extra large Pudding bonce. Behind me on the rocky mountain slope, our chute was flapping in the breeze. There was no turning back. My tandem pilot, Alp - he of eleven years paragliding experience - told me to walk so I walked and then I ran perhaps three steps and we were up - lifted off the mountain like thistledown. 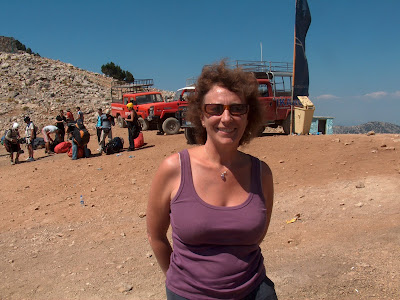 Shirley at the lauch area on Babbadog.

Like a condor, we swooped over mountain crags and the ancient pine forest below with a gentle wind whooshing past us, cradling us, guiding us down the mountain like a trusted friend. Alp kept talking to me but the extra large helmet was so tight on my ears I could hardly hear a word he said but I was shaking my head, repeatedly gushing "Fantastic!", "Amazing!" It all reminded me of a recurrent dream I had as a boy of perhaps eight or nine - flying high above the earth like a bird. 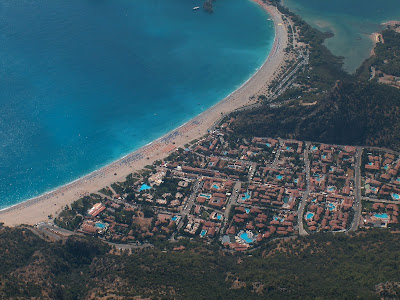 And then we were over the harsh Turkish mountain landscape with the famous blue lagoon of Olu Deniz far beneath us. Alp was literally pulling the strings. I just sat back and marvelled as we circled the little tourist town and a secret Greek valley beyond. Gradually we spiralled down and down till the world took on more familiar proportions and all too soon we were down at the promenade. Alp yelled at me to stand so I stood and there we were unharnessing, unbuckling. The end. Wow!
Shirley was up for it from day one so I guess I have her to thank for stirring the Pudding from his shady sunbed by the pool. How was it for you darling? Quite incredible. 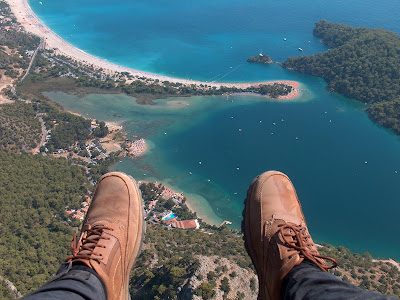