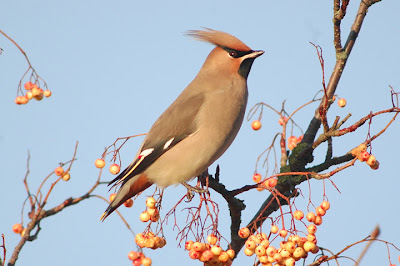 So there I was standing in the kitchen of our son's terraced house. Something caught my eye outside in his little urban garden. It was a bird, a beautiful bird and it had paid a visit simply to gobble a couple of rosehip berries from the bushes near the garden wall. I observed it for perhaps ten seconds and then it was gone. I may have seen such birds before without really noticing them but I have never seen one in our own much larger garden.
This morning I visited the RSPB website and checked through their "bird identifier". After a while, I found my beautiful feathered friend. A waxwing! Like the fieldfare, another winter visitor to Britain, escaping from the cold of more northerly climes. It seems they are rarely seen around Sheffield - mainly sticking to the east coast - but my waxwing seemed happy enough gorging himself by the garden wall. You can't help but feel a little envious of creatures like that - living freely despite man's best efforts to unhinge the natural order of things.
This is what the RSPB had to say about the waxwing:-
Overview

The waxwing is a plump bird, which is slightly smaller than a starling. It has a prominent crest. It is reddish-brown with a black throat, a small black mask round its eye, yellow and white in the wings and a yellow-tipped tail. It does not breed in the UK, but is a winter visitor, in some years in larger numbers, called irruptions, when the population on its breeding grounds gets too big for the food available.

Where to see them

The first British arrivals each winter are usually seen on the east coast from Scotland to East Anglia, but birds move inland in search of food, increasing the chances of seeing one inland.

When to see them

Berries, particularly rowan and hawthorn, but also cotoneaster and rose.