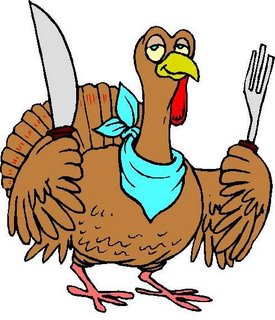 Tomorrow morning, Shirley and I are away on holiday to Turkey for ten days or so. I might not be adding any posts for a while unless I can find an Internet cafe. One of my all-time favourite films is "Midnight Express" - largely set in Turkey. If that film is anything to go by, this could be my last blogpost ever!
Why is "Turkey" the name of a country and also a big fat North American bird often eaten at Christmas? The story goes back to the seventeenth or early eighteenth century when turkeys first appeared in England via France. Rumour had it that these rather impressive creatures originated not in the wilds of New England but in the land of the Turks - so they got the handle "turkey". On the theme of Christmas, we will be staying just five miles from the little Turkish village where it is reputed that St Nicholas (Santa Claus) was born. See you!