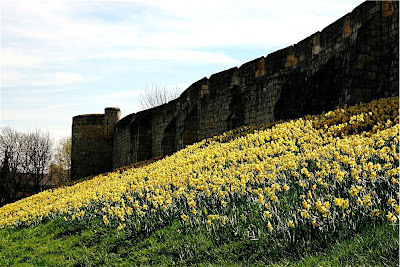 Daffodils beneath York city walls.
Here in Great Britain, as the snowdrops tire, daffodils emerge magically from our winter soil at around this time of year. I remember as a student in Scotland, I would often have to travel upon the spectacular east coast railway line. In springtime, I would notice how in Stirling and Linlithgow and Edinburgh, daffodil fingers were only just pushing through the surface but by Durham, flower buds were revealed and by York, the slopes of the city walls were bursting with the gorgeous fresh golds and primrose yellows of ten thousand gaudy daffodils, swaying together like a vast army that had come to suppress the winter blues.
Yesterday, Shirley and I drove over to Swanland, near Hull to meet up with our friends and fellow crazy Hull City fans. It is a lovely, almost exclusive village and having once wandered lonely as a cloud through Beverly Hills, California, I swear that many of the grand houses in Swanland would put Beverly Hills to shame. "Who lives in them?" asked Shirley. I don't know - lawyers, surgeons, business leaders, and perhaps above all people with pots of inherited wealth -I surmised. There were so many fresh new daffodils gathering at the gateposts and on the verges , bursting with pride, trumpeting an end to winter and the renewed fertility of our earth.
For many people who know little of poetry, Wordsworth's famous poem about daffodils suggests a stereotypical cartoon-like figure of a poet frolicking through the countryside like a nancy boy, quill in hand, describing spring flowers. What a gay day! It isn't that at all. He's writing about emotion recollected in tranquility and about mankind's relationship with Nature. He thinks of Nature as a rejuvenating force that we can so easily miss or take for granted. The Lakeland daffodils at the beginning of the nineteenth century are merely a symbol of the uplifting forces of Nature in which human beings are only a jigsaw element.
"Affodils" or as the Dutch called them - "De affodils", have been around a long time, beginning their botanical journey in the mists of time on the edges of the Mediterranean in Turkey and Italy and Spain. They have been nurtured and cultivated to such a degree that there are now countless varieties and though their trumpeting blossoms don't last for very long, they are surely one of our most favourite flowers. A reminder from 1805:-
Daffodils
I wandered lonely as a cloud
That floats on high o'er vales and hills,
When all at once I saw a crowd,
A host, of golden daffodils;
Beside the lake, beneath the trees,
Fluttering and dancing in the breeze.
Continuous as the stars that shine
And twinkle on the Milky Way,
They stretch'd in never-ending line
Along the margin of a bay:
Ten thousand saw I at a glance,
Tossing their heads in sprightly dance.
The waves beside them danced; but they
Out-did the sparkling waves in glee:
A poet could not but be gay,
In such a jocund company:
I gazed -- and gazed -- but little thought
What wealth the show to me had brought:
For oft, when on my couch I lie
In vacant or in pensive mood,
They flash upon that inward eye
Which is the bliss of solitude;
And then my heart with pleasure fills,
And dances with the daffodils.
By William Wordsworth (1770-1850). 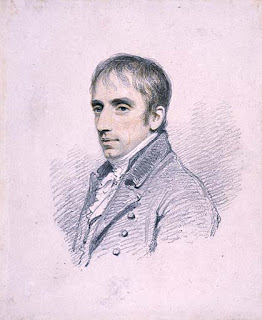 What are my words worth?